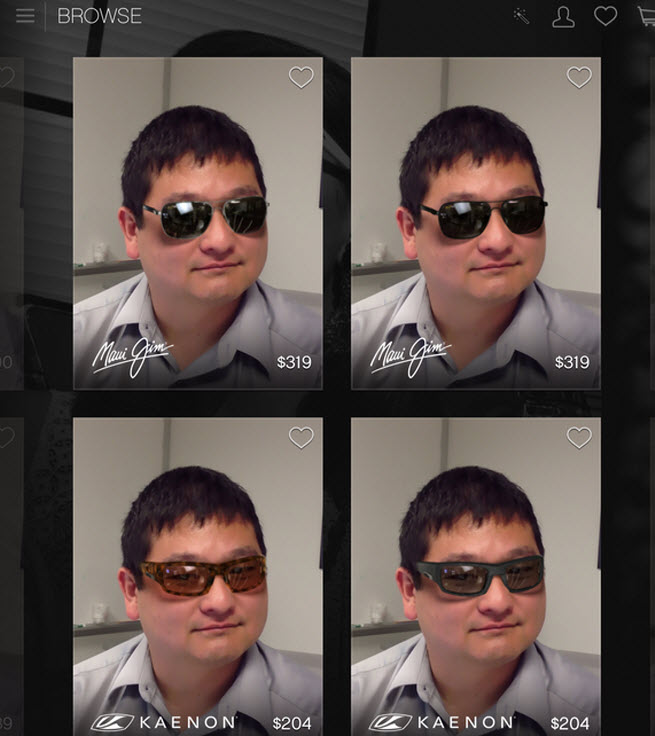 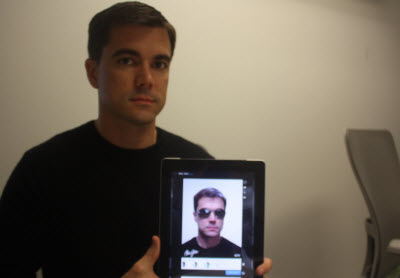 The technology is an application of augmented reality, but with a realistic style that makes the shopping experience much easier, as you can quickly check out hundreds of sunglasses (or regular glasses) and find a match for your face. The Glasses.com 3D Fit app will even recommend glasses to you, and you can share the images with your friends so they can help you decide. The app will be available on the iPad in May, with iPhone soon after.

“We make a 3D model of your face,” said Jonathan Coon (pictured with his own virtual image), CEO of Glasses.com parent company 1-800 Contacts, in an interview with VentureBeat. “You can search for sunglasses and get lots of suggestions. Our goal is to make it more fun. We borrowed more from Hollywood special effects than augmented reality.”

Coon showed the app to me yesterday and scanned my face. The app captures your face by taking a series of photos. I had to stay still and turn my head slowly from side to side so that the iPad’s camera could capture my face from many angles. It then stitches the images together into a 3D rendering in a relatively short time. Once the company’s servers render your face, you can play around with it, swiping sideways to see the side of your face. Then you can try on different sunglasses, four at a time (mine is scanned above).

Coon had the idea a while ago, but the technology is finally good enough to execute on it. The app capitalizes on OpenGL ES, the graphics standard that allows an app to use a device’s 3D graphics processors to render an image, rather than the central processing unit. The graphics processor is much faster and makes for fluid motion graphics in the app. You can swipe sideways endlessly and the app will keep showing you new glasses and how they would look on you. You can even see the shadows the glasses would cast on your face. If you move the glasses, the shadows move too. 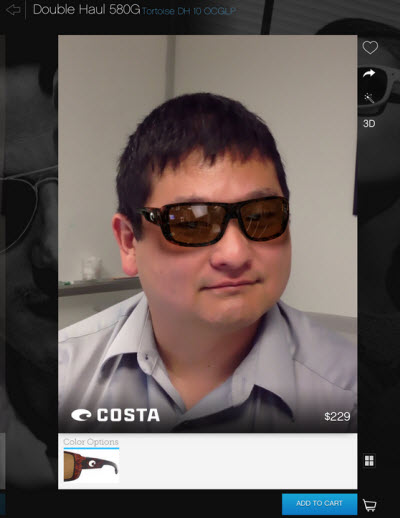 “We try to get much closer to realism than your typical augmented reality app,” Coon said.

The app is an innovation that comes from the small Glasses.com division (with a few dozen employees) of 1-800 Contacts, which health insurer WellPoint acquired last year for an estimated $900 million.1-800 Contacts has 750 employees. Android and web apps will come later this year.

That’s not bad for a business that started in Coon’s dorm room at Brigham Young University in 1992. He had the foresight to acquire the contacts.com web domain in 1997, and he picked up glasses.com in 1999. Coon, as an aside, is the brother of Jeremy Coon, the executive producer and editor of the hit 2004 film Napoleon Dynamite. Looks like Jonathan Coon has some dynamite of his own with this app.

You can move the glasses up or down your nose and see what they look like from the side. You can also view them up close by zooming in. The speed of the 3D is never an issue. That comes from a few years of iteration in development.

“It never felt like the tech was there before, until we saw a demo of [Microsoft’s 3D image synthesis app] Photosynth in 2007. That technology can be used to create 3D panoramic photos and recreate images such as the cathedral of Notre Dame in 3D.

“I thought you could do that with glasses one day,” Coon said.

The iPad captures the images and then sends them over a Wi-Fi, 3G, or 4G connection to a data center. There, the images are processed and a 3D rendering is sent back to the iPad. That process takes maybe 30 seconds or so. Once you scan your face, it’s easy to try on new glasses.

Coon showed off the technology at an exhibit at the recent TED conference in Long Beach, Calif. Nobody asked about the 3D technology, which was very difficult to create. The most common question he got from people trying the app was, “Which of these final pairs is good for me?”

So my question is, based on the photos at the top, which pair is good for my face?