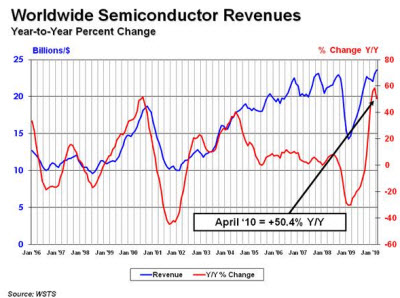 Global chip sales continued a steady recovery in April, with sales up 2.2 percent from March and 50.4 percent from a year ago, according to the chip industry trade group.

Sales in April were $23.6 billion, compared to $23.1 billion in March (when sales were up 58.3 percent from a year ago) and $15.7 billion in April 2009, reported the Semiconductor Industry Association. Chip sales are a bellwether for technology company sales since chips are used in everything electronic. Year to date, chip sales were $92.6 billion, up 54.2 percent from $60.1 billion a year ago. All monthly sales numbers represent a three-month-moving average, a statistical smoothing technique.

“Global sales of semiconductors grew at a healthy rate in April, surpassing the previous monthly record level of November 2007,” said SIA President George Scalise. “As expected, both the year-on-year and sequential growth rates moderated slightly. The unusually high year-on-year comparison is a reflection of the trough of the recession in early 2009 compared to strong demand today.”

Contributors to growth were investments in 3G wireless communications as well as recovery of demand in the enterprise, car electronics, and industrial markets. Going forward, Scalise said chip sales will return to normal seasonal patterns, which means a typical slowdown in the summer. The SIA will update its annual forecast on June 10.