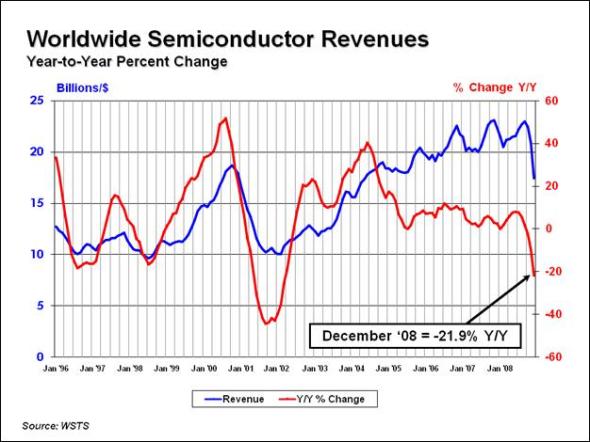 Global chip sales fell 2.8 percent in 2008 to $255.6 billion, according to the Semiconductor Industry Association. This is the first year-to-year decline it has seen since 2001.

The chip industry’s trade association said the month of December showed a sales decline of 22 percent to $17.4 billion as the world’s economic doldrums took hold.

The  December results were also down 16.6 percent from November. The fourth quarter is typically a strong one for the chip industry, but sales fell across the board among major industry segments like automotive, computing, mobile and corporate information technology, said George Scalise, president of the SIA. The steepest revenue declines were in memory chips, where price pressures stemmed growth in total unit shipments. The typical amount of dynamic random access memory in a PC has increased by 44 percent to 1.8 gigabytes, while the amount of NAND flash memory leaped 244 percent in a typical cell phone.

Consumer sales still account for over 50 percent of total chip demand, so the industry’s fortunes are closely tied to the macroeconomic events. Prior to the fourth quarter, 2008 was a reasonably strong year.