The outlook for the technology market looks weaker in 2017, said Steve Koenig, director of research at the Consumer Technology Association, the group putting on CES 2017, the big tech trade show in Las Vegas this week. Overall unit volumes will be flat, while revenues will hit $929 billion in 2017, down 2 percent from $950 million in 2017.

The news isn’t all gloomy, as emerging markets and technologies are seeing rapid growth, even as maturing categories and markets are shrinking. U.S. consumer tech spending will grow from $287 billion in 2016 to $292 billion in 2017.

The outlook depends on not only sales of major tech gadgets, but also the state of the global economy. 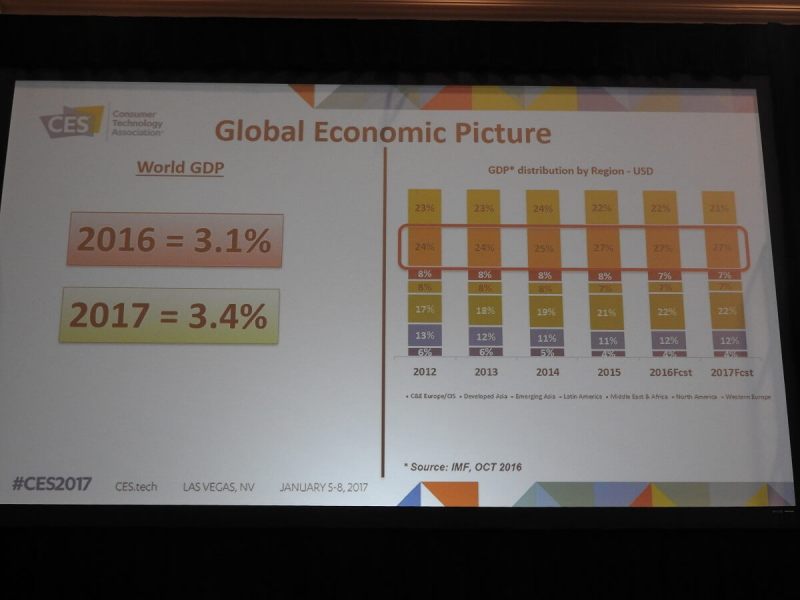 The world gross domestic product (GDP) is expected to be 3.4 percent in 2017, compared to 3.1 percent in 2016. That’s a pretty healthy growth rate, Koenig said. The global economy will be uncertain because of things like Brexit and the Trump administration. But Koenig said that commodity prices are firming, and sentiment toward emerging markets is positive, particularly in Asia.

“Consumers in emerging markets are really converging on smartphones,” Koenig said. “If they are going to pick one device, it’s going to be a smartphone.” 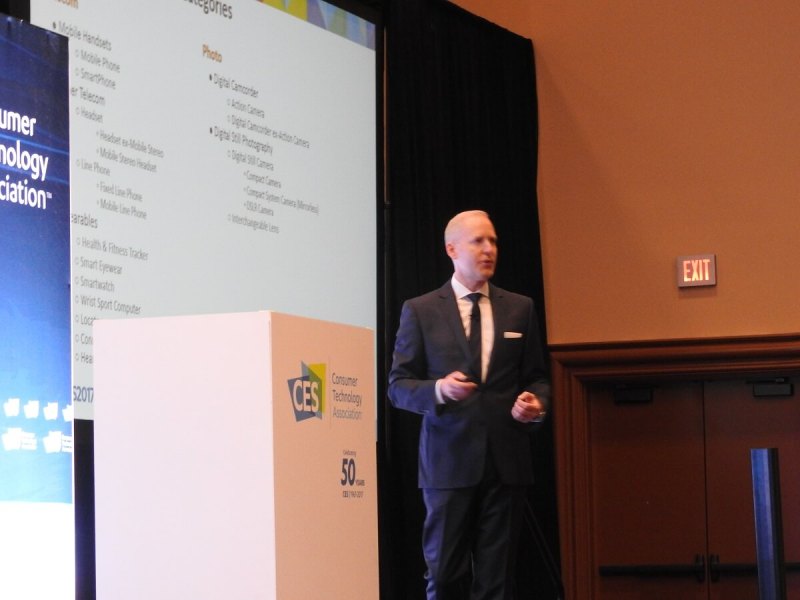 Above: Steve Koenig, director of research at the CTA, at CES 2017.

If you add in tablets, two products account for 51 percent of all consumer tech spending, and if you add laptops, you get to 63 percent, Koenig said.

Tablets themselves peaked in 2014 with 223 million sold. Now they have fallen to 150 million in 2016 and an expected 136 million in 2017, Koenig said, explaining that tablets are getting squeezed by both laptops and smartphones.

Global PC volumes also look like they have crested. Desktop PC sales are expected to be 50 million in 2017, compared to 53 million in 2016. Mobile PCs are also falling slightly to 111 million units in 2017.

TV sales are at 225 million in 2016, falling slightly as well in 2017. One of the reasons is that smartphones, laptops, desktops, and tablets are encroaching on the domain of the TV. You can, for instance, watch Netflix on just about any device, and many viewers do.

“This is a global phenomenon,” Koenig said. “It’s not just quantified self or a single market. It has a lot of innovation fueling growth. We need new organic growth and we are getting it from wearables.”

As far as regions go, Latin America has weakened, with tech sales falling in both units and dollars. Brazil, Argentina, and Venezuela are coping with serious economic troubles, which is dimming the outlook for consumer tech spending in 2017. 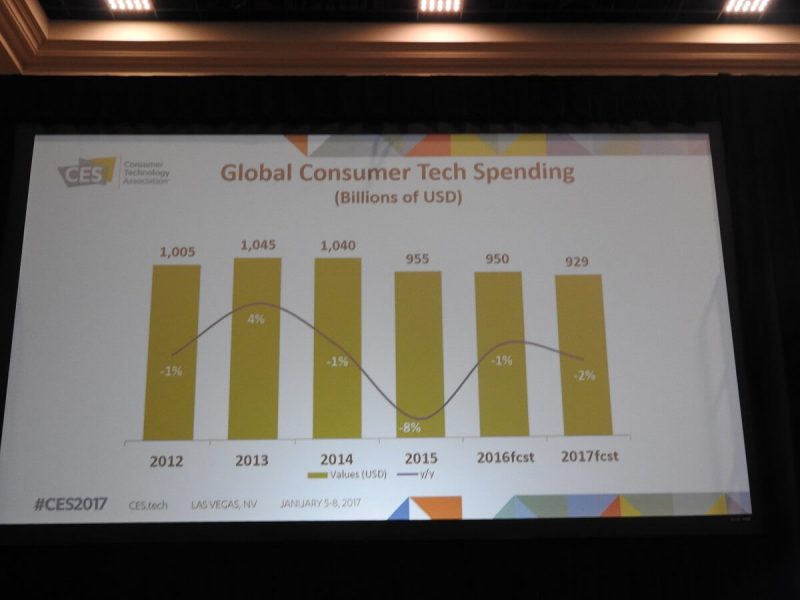 North America is pretty stable, with unit sales flat and dollar sales falling 1 percent. U.S. consumer confidence is the highest it’s been since 2001, with spending, wages, and interest rates going up. Canada has been hurt by falling oil prices, while Mexico is seeing modest growth.

In Western Europe, unit sales are flat, and revenues will be down about 2 percent in 2017. Smartphone sales are stable, but other categories are falling. The consequences of Brexit, the U.K.’s exit from the European Union, are unclear.

Central and Eastern Europe is still weak, with unit sales down 1 percent and revenues down 2 percent in 2017. Geopolitics have destabilized parts of the region, but consumers are getting a taste of new tech and they like it, Koenig said.

Asia is expected to be down 1 percent in units and down in revenues. China has become a fully developed tech market, with entertainment driving its growth. But India is now growing more rapidly than China and could soon become a juggernaut, Koenig said.