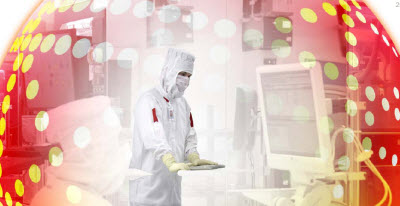 Chip makers Globalfoundries and Chartered have combined operations to form a semiconductor contract manufacturing powerhouse with $2.75 billion in annual revenue.

The combined company will compete against market leader Taiwan Semiconductor Manufacturing Co. (which has bout $10.4 billion in annual revenues), not to mention companies with their own in-house factories such as Intel.

The combination is a culmination of the companies’ ambition to create globaly foundry, or a contract manufacturing firm that makes chips which are designed by other companies.

A series of events paved the way for the combination. First, in 2008, the government of Abu Dhabi bought a majority stake in the chip manufacturing business of Advanced Micro Devices. AMD became a chip design firm, while the manufacturing operation was renamed Globalfoundries. Then, last September, the Abu Dhabi entity, Advanced Technology Investment Co. (ATIC), agreed to buy Singapore’s Chartered for $3.9 billion.

The Sunnyvale, Calif.-based Globalfoundries will now have 10,000 employees across 12 locations in the U.S., Europe and Asia. The company’s 150 customers include many of the world’s biggest chip making and chip design firms.

The company will have leading edge manufacturing from the AMD side of the house, and it will be making advanced chips for AMD. The Chartered side of the house will serve customers with more mature factories, said Kevin Meyer, vice president of marketing and alliances, in an interview. Investors have pledged to put more than $10 billion into the combined companies, which need the capital to build chip factories in places such as New York, Singapore, and Dresden, Germany. The company has three big factories, which can make chips on wafers that are 300 mm in diameter, either in the works or under construction. And it has six more older factories.

In Saratoga County, N.Y., the company has broken ground on a factory that could require a $4.6 billion investment when it is fully built out. That factory is expected to create 1,400 jobs. Full told, the factories will be able to produce 425 million wafers a month by 2015, said Tom Sonderman, vice president of manufacturing systems. A wafer is sliced into many different chips, and so the factory capacity could be in the billions of chips per month.