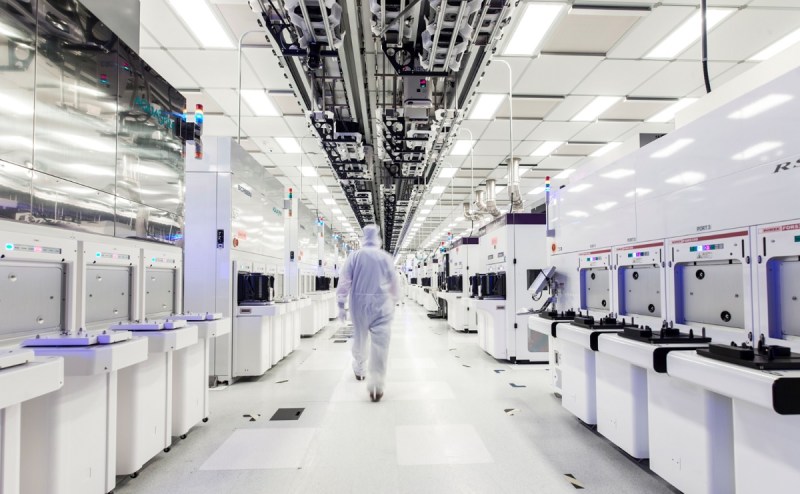 Above: Inside GlobalFoundries’ 7-nm chip factory.

VB: As far as financing those factories, are you optimistic about that? Does it mean the big equity guys are in this in a big way, or the governments of the world?

Jha: Governments have certainly played a role. We’re building a new factory in China, and we’ve certainly gotten support from the government. By and large, I don’t see private equity guys getting into financing the chip business. I’ve not seen them. If anything, we’re running a mile away. They’re very much focused on services and software. AI has certainly gotten a lot of financing. Lidar and radar, automotive things have gotten a lot of venture funding lately.

I would say that semiconductor is receiving more private investment today than it has in the last 10 years, though. Largely because people are beginning to realize that to solve real fundamental problems, you have to control the interface between semiconductor and software. System houses like Google, Tesla, Amazon, Microsoft, they’re all now investing more in semiconductor than they ever have.

We’re working directly with these guys. Before, they bought chips from the semiconductor houses. Now they work directly with us. You’ve seen the tensor flow architecture. That was done by Google working directly with a foundry, albeit not with us. In successive generations, we’re working on a number of architectures with each of those guys. In machine learning and AI, there’s been a lot of funding in the Bay Area, and we’re working with a number of them. The startups are interested in meeting with a silicon company that can provide everything they don’t necessarily have in-house. We have to be willing to scale our capabilities to meet whatever they need.

We’re spending a lot of time increasing our capability to support applications which we see as important. AI is one. Building radars for automotive is another. You have to integrate 77GHz radar. There’s a huge amount of combining radar knowledge with image knowledge. You look at a scene, you look at the distances, and it allows you to make sense both ways. They call that sensor fusion, and it’s becoming very important.

Jha: Yes, but not for logic. Lidar is an example. It’s based on photon generation. You can’t generate photons out of silicon. Or, a lot of people have tried without any success. You need materials like indium phosphide, gallium nitride, silicon germanium. They do become more important for specialist tasks, like power amplification, opto-electronics, high-performance applications. We’re one of the leaders in all of this. In RF, I would say generally we have very large market share. We’re seen as leaders.

VB: But that wouldn’t necessarily take away the lion’s share from silicon.

Jha: I don’t think so. People have been developing alternatives to silicon for a long time. Roughly speaking, silicon is a $350 billion industry. I don’t see that changing. In fact, I see a dramatic growth as a result of intelligence going to the edge in semiconductor demand. I think a golden age for semiconductor is coming. You can’t do AI without silicon. Most of the time, people want to use applications where there’s real-time decision-making. “Do you recognize this object?” Those decisions have to be made in real time at the edge. That drives square kilometers of silicon consumption.

VB: Is AI going to have a manpower impact in your industry? Are jobs going to be eliminated?

Jha: Every generation of technology that has come along has been feared for its job reduction. What it does is potentially create more jobs. It’s just that the skill set required for new jobs is dramatically different. A friend of mine has a startup, a box about the size of this chair with wheels, an industrial cleaning device. All the shopping malls and offices today that are being cleaned by a vast number of people can now get cleaned by this. You let four of them loose at 10 p.m. when the mall closes, and at 7 a.m. it’s clean. That’s definitely job reduction. But it’s creating other jobs, monitoring and the like.

Autonomous vehicles have a large impact on the job market. Exactly what the impact is, I don’t know. But one thing I’m certain of is there will be skill set transfer. The economic impact of these technologies, by and large, has not been negative over the last three or four industrial revolutions. We had the first industrial revolution, globalization, the internet, and now AI. That’s four massive changes I can think of, and by and large they have increased jobs.

VB: How is your confidence in Silicon Valley, especially the competitiveness of the U.S. in chips? Governments are really competing to get these chip factories going.

Jha: The manufacturing, certainly, other than Intel and ourselves — we’re the two large manufacturers in the U.S. We have three factories up in New York. There are others with factories, but a lot of the manufacturing in terms of dollar amounts has moved out of the U.S. The innovation continues to be here — not exclusively, but mostly. That’s one reason we’re headquartered in the Bay Area. We’re closer to the next generation of innovation.

You may not have this context, but I was at Qualcomm and I saw this play out. If you look at the fabless industry — the growth of semiconductor largely happened with fabless companies. Mobile drove that growth. The winners in mobile were TSMC, Qualcomm, ARM, Apple, arguably Samsung a bit, arguably Google a bit, although how much Google makes off Android isn’t clear to me. There were lots of losers, but these were the big winners.

Being close to the Bay Area and looking at what technologies are coming along and where to invest — remember, the semiconductor industry was all driven by FPGAs and GPUs. CPUs were all controlled by two companies that were IDMs. I have to understand what industries will drive the next generation of growth and make sure that I’m there with the right technology for those industries. That’s why being in the Bay Area is a real competitive advantage. We work with startups not because they make us revenue but because we get a much better understanding of where the industry is headed. 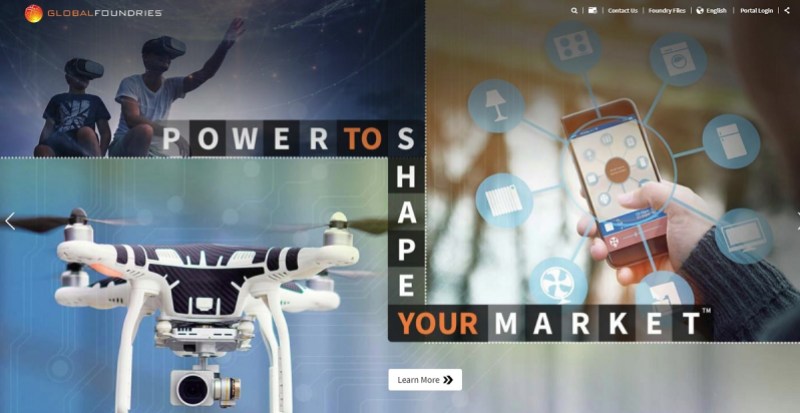 Above: Globalfoundries’ chips go into a wide variety of electronics.

Jha: There’s a school of thought, I don’t know if you’ve heard this, but it says that part of the reason engineers work so hard in the Bay Area is because they have to afford a house here [laughs]. If you’re in Idaho, you don’t have to work so hard. You don’t have to think about where the next startup is and how to succeed. I don’t know if that’s a valid theory, but I’ve heard it said.

VB: How do you feel about diversity issues in the chip industry?

Jha: If you think of the manufacturing side of the chip industry, there’s no diversity issue because the workforce skill set is not at a level where you can talk about diversity in terms of gender or race. From a race point of view, technology generally has been a little more diverse anyway. From a gender point of view, there has always been an issue, but in manufacturing there’s a little less of an issue.

VB: Any other big topics you’re thinking about?

Jha: 5G is going to be very disruptive. We’re extremely well-positioned for 5G. I think 5G will be as disruptive to wireless communication as data was to voice. Data today is completely — remember, it used to be all about the number of minutes. Who cares about minutes anymore? Data is the driver. Today we get, on the high-end, megabits. I think we can get gigabits at a sustained basis. That changes your interaction models dramatically. Second, there’s a lot of attention being paid to security, as well as latency. You can do a lot more things with lower latency.

VB: How soon do you think 5G arrives?

Jha: There’s the old saying about how the future is here, it’s just not evenly spread. A company out of Dallas — I’m on the advisory board — is deploying systems starting early next year. They’ll be small systems, but what will happen in the beginning — Verizon has announced plans to deploy fixed systems early. For it to be mobile, I think probably 2020. But fixed systems can deploy early next year.

VB: Maybe that accomplishes what Google wanted to do with Google Fiber.

Jha: Yes, yes. Also, remember there are lots of satellite systems going up, three or four, to provide coverage as well. Satellite systems work well for remote areas. I don’t know that satellites can compete effectively in dense areas for data delivery.