Nick Earl has been trying to lead a creative transformation at Glu Mobile for the past two-and-a-half years since he joined the mobile game company and later became its CEO.

It started with the acquisition of Crowdstar in 2016 and the growth of the titles Design Home and Covet Fashion, two games aimed at women that came from outside-the-box thinking about what a game can be. Earl talked about Glu’s transformation to focus on creativity in a fireside chat with Mike Vorhaus, president of Magid Advisors, at our recent GamesBeat Summit 2018.

Earl has capitalized on the growth from the Crowdstar games to refocus resources around creative leaders, including the five studio heads at the company. He is moving many of the company’s 550 employees into a new headquarters in San Francisco and is getting by with a much smaller staff than the 900 or so employees the company had just a few years ago. 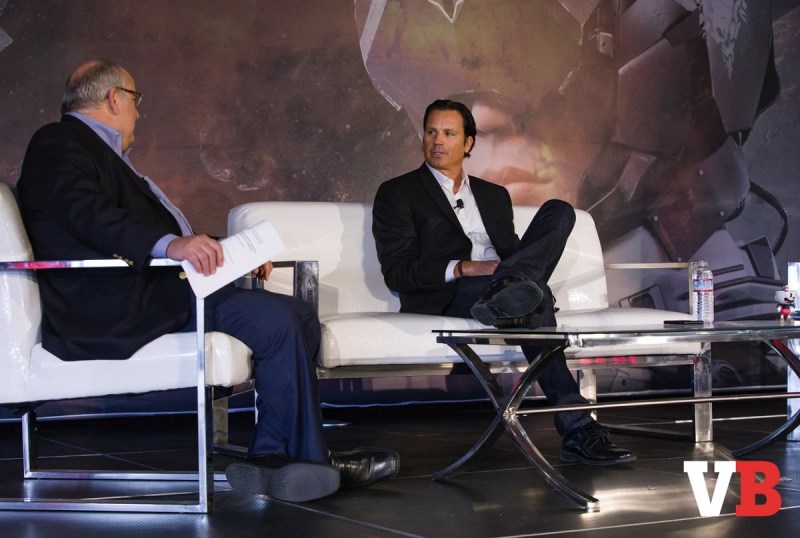 Above: Mike Vorhaus (left) of Magid Advisors and Nick Earl of Glu at GamesBeat Summit 2018.

Among the things Glu gave up were its focus on social celebrity games based on superstars, such as Katy Perry and Taylor Swift. Kim Kardashian: Hollywood is still generating revenue, but the revenue guarantees promised to celebrities on other less-successful games were hurting Glu’s profits enormously, Earl said.

“We have five creative leaders at the apex of their creative organizations, and we asked them what they would like to do,” he said. “And what we, those of us who are not the stars or the ones developing the products, can do to support their efforts.”

That yields better results, Earl said. The focus is on intra- and inter-team communication between the different creative studios.