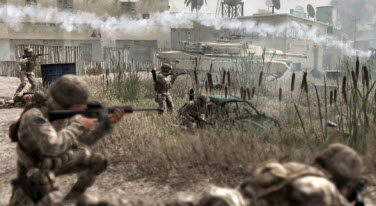 The new titles include a mobile version of Modern Warfare 2, Activision’s flagship game coming this fall. The console version of the game (pictured) is considered to be one of the most anticipated games of the year, so the mobile version will likely be a hot seller.

San Mateo, Calif.-based Glu is essentially contracting with Activision to convert several of its popular console game titles to mobile games. The games will be published on the Android, Blackberry, Brew, J2ME and Windows Mobile platforms.

While the iPhone is noticeably absent, the list of platforms shows that Glu is pushing heavily into the smart phone space, growing beyond its focus on traditional mobile phones. Besides Modern Warfare 2, the titles it’s working with include Crash Mutant Island, which will be available in the third quarter, and Blur, Guitar Hero 5, and Tony Hawk Ride, all to be published in the fourth quarter.

Glu Mobile said in January that roughly 30 percent of its resources will be devoted to making games for smartphones. The big challenge for Glu is to continue to maintain its leadership in mobile games even as much of the market shifts toward the iPhone.