To million of gamers the world over, Yoshi is an anthropomorphic dinosaur that serves as Mario and Luigi’s friendly sidekick. But to car owners in a handful of U.S. cities, the famous name is taking on a completely different meaning.

Founded in 2016, Palo Alto-based startup Yoshi is an on-demand car maintenance platform that delivers gas to your automobile, as well as handling related tasks, such as oil changes, cleaning, and more — all while your car is parked just where you left it. Drivers can order the service directly from the Android or iOS mobile app.

Of course, this does come at a cost. Fuel delivery varies by region, but it should be around $7 for the service — plus the price of the gas. Drivers can also elect to pay a $20 monthly membership, which includes free weekly deliveries. Elsewhere, a basic wash can cost around $45, with a full “detail” clean setting you back $175, though prices may be higher in areas such as San Francisco. 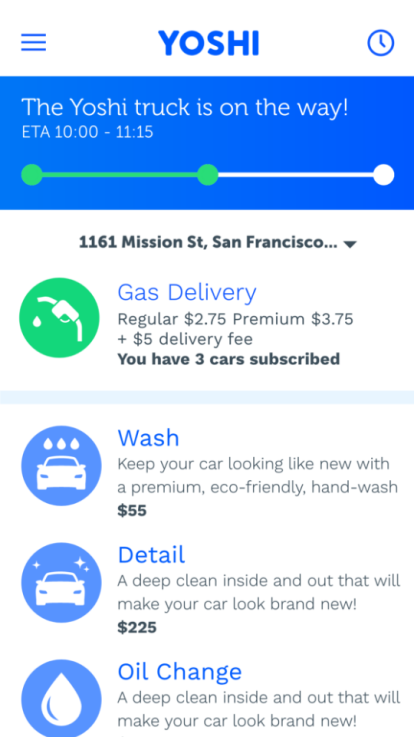 For now, Yoshi operates across Silicon Valley, San Francisco, Nashville, Austin, Atlanta, Los Angeles, and Chicago. But the company has also announced a fresh $13.7 million in funding via a series A round led by General Motors Ventures and ExxonMobil, with contributions from Y Combinator, the Durant Company, and Arab Angel, among others. With this cash injection, Yoshi said it plans to expand to a further 25 metropolitan areas this year.

“We believe Yoshi has a big opportunity to be part of the transformation underway in the automotive industry relating to how vehicles get fueled and serviced, which can more than double a vehicle’s cost over its lifetime,” said Yoshi CEO Nick Alexander. “We could not have a better syndicate of investors supporting us, including the leading U.S. automaker and oil and gas company.”

Yoshi is one of a number of startups operating in the on-demand car maintenance realm. Back in August, California-based Booster raised $20 million, taking total funding for its refuel and basic car-care service to $33 million, while earlier this week London-based Zebra Fuel announced a $2.5 million funding round. Other players include GasNinjas, Filld, and FuelMe.

GM itself has made a number of automotive acquisitions and investments in recent times, boosting its self-driving car credentials with the acquisitions of Cruise Automation and Strobe and plowing cash into initiatives such as Mcity, a 32-acre “mock city” for testing connected and self-driving cars. GM’s investment-specific arm, General Motors Ventures, has been fairly quiet recently, though it did join BMW and Toyota to invest in Silicon Valley AI startup Nauto last summer.

So why is GM now looking to invest in Yoshi? Well, GM has big plans to integrate the technology into the very fabric of its vehicles. Thus far, Yoshi has required drivers to beckon fuel through a mobile app, but moving forward you may be able to do so through the car itself.

It’s not entirely clear what form this new service will take, but it’s safe to assume that if you’re running low on fuel, you car may be able to arrange for delivery of petrol or diesel all by itself.

“In the future, when you buy a new car, you’ll be buying a self-fueling, self-servicing car,” added Alexander. “Yoshi’s service will come built right in.”

ExxonMobil, for its part, hasn’t made many venture investments in startups, but the fact that an energy giant is partnering with an automotive firm of GM’s stature to invest in Yoshi points to the industry’s growing interest in on-demand services. Why waste time traveling somewhere to pay for a service when you can pay someone to come to you?

“The on-demand economy is changing nearly every aspect of our everyday lives, including consumer expectations about the way fuels and lubricants are purchased, delivered, and used,” said Adam Wariner, fuel and lubricant innovation manager at ExxonMobil. “We believe the simplicity and convenience of this direct-to-vehicle care service will attract new customers to Exxon and Mobil-branded products.”