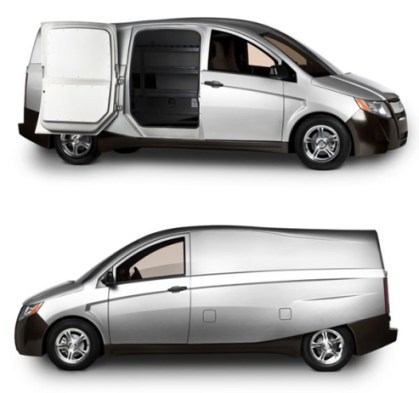 The $5 million amount doesn’t seem like much, but gives the major automaker a minority stake in the Indiana-based company. Bright says it will use the money to churn out its plug-in hybrid van, called the Idea, which has yet to go on sale. Capable of getting 100 miles per gallon, the van is being marketed for commercial fleets.

Like many other plug-in hybrids, the Idea will be able to run on electric mode exclusively for about 40 miles before switching over to its internal combustion engine. Even then, the average mileage is about 36 miles per gallon due to the van’s light weight and aerodynamic design.

The investment from GM Ventures didn’t exactly come out of the blue. Bright was co-founded by John Waters, who spun it out of the Rocky Mountain Institute, one of the most respected energy think tanks in the U.S. Waters, now Bright’s vice chairman, worked for GM in the 1990s, specifically developing its ill-fated EV1 electric car. The startup and GM also signed a memorandum of understanding last month, solidifying a strategic partnership.

Originally, Bright had planned to ramp up production of the Idea in late 2012 — 2013 at the latest. This would have made it somewhat late to the party where commercial fleet vehicles are concerned. Competitors like Miles Electric Vehicles are already mass producing zero-emission cars and trucks for major fleets. There will also be more opportunities forthcoming as major fleets decide to go electric.

Earlier this year, the U.S. Postal Service kicked off a test of electric mail-delivery trucks. Bright is one of the few companies to score a pilot deal, but it will need to scale to take advantage of similar partnerships in the future.

Fortunately for Bright, the infusion from GM should expedite the Idea’s roadmap. The company now says it will start making the vans as early as the third quarter of this year. Previously, it had pinned its hopes on a $450 million loan from the U.S. Department of Energy’s Advanced Technology Vehicles Manufacturing program, which it will continue to pursue.

GM Ventures, launched at the start of June, will be distributing $100 million to companies developing groundbreaking automotive technologies. It counted hybrid designs as one of the areas it hoped to foster, as well as consumer electronic integrations, efficient engines and advanced battery architectures. In this context, Bright seems to be a nice, understated first bet.