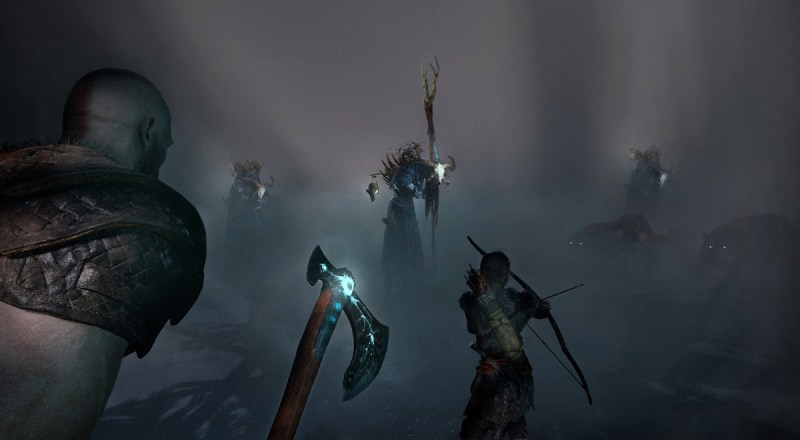 Above: The Norse world is scarier than the Greek world.

GamesBeat: It’s a very tight story. Tightly woven, tightly written. I was thinking about why Red Dead Redemption 2 didn’t win at the big one at Game Awards, and that was vast and epic, but it was not so tight. You’re going through 105 missions in that game and sometimes you’re wondering, “Why am I doing this? What does this have to do with what they’re trying to say?”

Barlog: I can’t imagine the challenge of taking that on, with the scale that they work at. To be able to wrangle all that stuff together.

GamesBeat: You mentioned this restart. They told me that they built a procedural version of the game, where it was an open world, emergent, and not as focused on the story, not as directed. No master storytelling. They said it didn’t work, and so they started over. They actually built all that, and then started over.

Barlog: That’s amazing. The Last of Us did the same thing. Naughty Dog is notorious, to be able to do that. If it’s not working, throw it out. It doesn’t matter if it’s complete. You have to make it work. I have so much respect for what Rockstar does, because they look at that. They take those leaps.

Very few games – and I haven’t played everything, so I’m sure once again that I will miss something – but there are very few games that pass on positive lessons to people who play them about doing something that doesn’t require an immediate reward. There may be a reward and there may not be a reward. Red Dead, that sequence with the poison, where the guy gets bit by the snake? You have the choice to pass by and leave him there to die, or kill him and rob him, or give him some bandages, or actually treat the poison. If you suck the poison out you save him, and you don’t get anything. Thanks. That’s it.

But then later you’re walking through town and that guy starts talking about how you’re the guy. He’s so thankful that he buys you anything you want in the store. That concept is such an amazing thing to pass on to players. I guarantee you that there’s a percentage of people who are processing that enough to realize that doing a good thing might pay off later. You don’t need to get something immediately. That’s an amazing metaphor.

There’s the dog thing too, where if you feed the dog, when you have to sneak into town later on the dog won’t bark, because you fed him. Those kind of positive connections are amazing.

Barlog: I was robbing the train in the beginning. He says, “Take care of the leftover guys however you want.” I wasn’t going to kill them, but I forgot that I had my gun out. I thought, “Oh, I have to pull my gun out,” and I pressed that same button to fire. I had just gotten out of a cinematic. So I shot one of these guys, and everyone freaks out. Same thing. I’ve already started a gunfight, but I didn’t want to kill them.

They did a great job of introducing things slowly. That whole opener was utterly brilliant.

GamesBeat: You had an open world-ish section of the game. How much of that did you want to have versus telling people where to go to the next part of the story?

Barlog: We kept describing it as “wide linear.” I was adamant that we couldn’t make an open world game. The cost of entry and the expectation level is so high that we’d never compete. We just don’t have the infrastructure and the systems. I don’t want to do that.

GamesBeat: You were 300 people or so?

Barlog: At our peak, yeah. 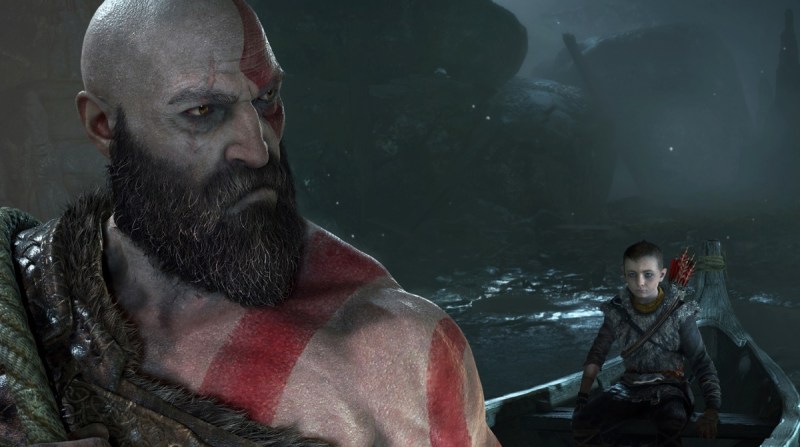 Above: Atreus: Why isn’t my dad more caring?

Barlog: Yeah, I think they were closer to 4,000. At the time I thought the 1,600 that Ubisoft had on Assassin’s Creed was a lot. To do these things, to do the complexity they have, you just need a lot of people. For us, not only do we not want to invest in that aspect of it, but to me the world needed to feel large, and not empty, but with surprising moments of discovery. It could feel like there were areas where there’s not a lot going on, and then all of a sudden an entirely new level opens up that you weren’t directed to, that you just discovered.

Once we started saying wide linear—I didn’t have a term for it. One of the level designers actually started saying that. That was a good way to describe it, because I kept saying, “not open world.” That’s the worst way to describe something, to say what it’s not. It’s better to give a good picture. It was hard for people to understand that, one, I wanted them to do work that might not be seen, which is a really hard thing to convince people about. “You worked hard on this, and 50 percent of players might not see it.” I think that’s okay, because that 50 percent might be told by their friend, “Did you find this?” “No way, you have to go over here to see that?”

That was my experience with Zelda. I talked to other kids at school, and all of a sudden I’d find out that if you put a bomb next to a wall over here you’d find a secret. Those kinds of shared experiences, the sense of feeling like you’re the one discovering these things in the world, that’s very important. But the cost of entry for open world, the gambling systems and territory control—it wasn’t in the cards.