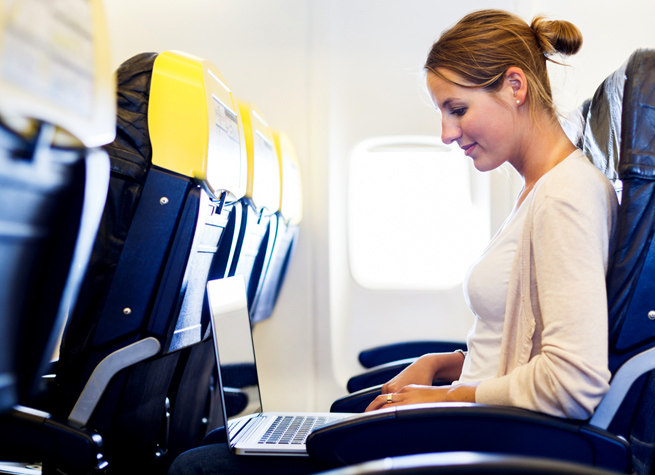 Updated at 3:53 p.m. PT with confirmation from Gogo PR.

In-flight Wi-Fi provider Gogo has increased its pricing on several flights throughout the United States, including the popular San Francisco to New York flight on Virgin America.

“We have made some changes to the passes to see what will work best for customers,” a GoGo customer service representative named Elizabeth told me online.

The flight pass changes, as first spotted by Paul Carr and subsequently reported by him on Pando Daily, are a bit confusing. On the Virgin America flight from San Francisco to New York, for example, you now have the option of purchasing 60 minutes for $10, 90 minutes for $20, 270 minutes for $40, a “Virgin America Traveler Pass” for $35, or Gogo Unlimited for $40.

That flight no longer offers a full-flight pass option that can be purchased while you are in the air.

While the change is startling, not all flights throughout the U.S. have changed in pricing. For example, the Delta flight between New York’s JFK airport to Las Vegas’ McCarran airport offers a full-flight pass for $16.

It appears Gogo wants customers to instead purchase pre-paid passes on the ground before the flight. The representative writes:

We do still have the pre-purchased passes that are available on the ground at www.gogoair.com for $12.70 that can be used to redeem any flight pass in the air that is a single pass or Day Pass. Or at www.delta.com you can purchase a 24 hour Delta Pass for $12.00.

Update: Gogo’s PR team got back to us, saying our article was accurate. The company did not outline full pricing options but confirmed it is “experimenting” with pricing.

“We are experimenting with different pricing on various flights,” a Gogo spokesperson told me. “We want pricing to reflect demand on any given route.”

In regards to encouraging customers to pre-pay, the spokesperson added: “We don’t want to tell people that they can’t pre-pay, but it’s not something we’re consciously doing.”

Here’s my full transcript with a Gogo online representative I had earlier today.

Elizabeth: Welcome to Gogo. My name is Elizabeth.
Sean Ludwig: Hi
Sean Ludwig: Have Gogo’s prices changed this week?
Sean Ludwig: If so, can you outline the changes?
Elizabeth: Hi Sean, we have made some changes to the passes to see what will work best for customers. Did you have feedback I can pass along?
Sean Ludwig: I’m just looking for pricing information. Can you give me the prices?
Elizabeth: The changes are flight based what is the airline and cities you are flying to and from and I can get that for you?
Sean Ludwig: Do you have an outline of all changes?
Sean Ludwig: Would really appreciate it
Elizabeth: Let me see if I can find something that does not require city pairings to be inputted to get the prices for you. One moment please.
Sean Ludwig: Thank you
Elizabeth: We do not have any chart or anything I can see without entering a specific city pairing for a specific airline. However we do still have the pre-purchased passes that are available on the ground at www.gogoair.com for $12.70 that can be used to redeem any flight pass in the air that is a single pass or Day Pass. Or at www.delta.com you can purchase a 24 hour Delta Pass for $12.00.
Sean Ludwig: How about New York to San Francisco on Virgin America?
Sean Ludwig: that’s a popular flight
Elizabeth: One moment and I will pull that information up for you.
Elizabeth: For that flight you have the option of a 60 minute pass for $10.00, a 90 minute pass for $20.00 (Buy 2 Get 1 Free) The Virgin America Traveler Pass for 34.95, and the Gogo Unlimited for $39.95.
Elizabeth: Those are for a laptop or tablet.
Elizabeth: For a mobile device you would have the option of the 60 minutes for $6.00, The 90 minutes for $12.00, and the Traveler Passes.
Sean Ludwig: On that flight, you used to be able to buy a single pass for the whole flight (for laptop or tablet) — is that correct?
Elizabeth: Yes, they are making changes to see what works best for customers.
Sean Ludwig: Do you have any idea what the most popular Gogo flight is in the U.S.?
Sean Ludwig: and if you have that, i would love the pricing for that flgith
Sean Ludwig: *flight
Elizabeth: I don’t. I know that JFK to SFO is a popular one as you mentioned.
Elizabeth: Let me see what I can find for a different set of flight passes for you.
Sean Ludwig: Great. Thank you.
Elizabeth: JFK to LAS on Delta offers a Flight Pass for $15.95, and the Traveler Passes. The mobile passes are the $9.95 Day Pass, the $7.95 Flight Pass and the Traveler Passes. Also both offer the $399.95 annual pass.
Elizabeth: All of these passes mentioned outside of the monthly passes would be covered by purchasing a pass on the ground, and then redeeming it on any of these passes in flight.
Sean Ludwig: Those JFK to LAS on Delta prices are unchanged from before?
Elizabeth: They have not changed all flights. They are testing some flights to see if that is a better option for customers.
Elizabeth: In the case of options for a couple of hours instead of a full flight pass, we are often asked for that option. They are seeing if it is something that would be good for customers.
Sean Ludwig: So these prices might change in the near future?
Elizabeth: At this time no decision has been made.
Elizabeth: If prices do change the pre paid passes on the ground will still work the same, and will be able to be purchased for the cheaper option on the ground and redeemed for any of the passes in flight.
Sean Ludwig: Are you trying to get all customers to buy pre-paid passes then, just to make sure it won’t cost more when they are in the air?
Elizabeth: I do apologize, I do not have the information of why the marketing team makes decisions like that. However I can offer the options I see available to best fit a customers needs, and give the feedback I hear.
Sean Ludwig: OK, thank you for your help. Sincerely appreciate it.
Elizabeth: You are welcome. Have a great day! Thank you for choosing Gogo. Fly classy.
Elizabeth has disconnected.