Going.com, a Boston-based networking site centered around urban events, has grown rapidly since it launched in June of last year.

The site, which tomorrow changes its name to Going (away from HeyLetsGo.com), says it has 220,000 unique monthly visitors to the site. The numbers, while not mind-blowing by any stretch, are enough to look around and ask why other sites haven’t sewn up this events area. Going lists events in three cities; it launched in Boston six months ago, and more recently New York and San Francisco. It tries to mobilize a community around each event. We tinkered with it today, before the relaunch tomorrow, and it is intuitive.

One factor keeping this and other similar sites from explosive viral growth is the number of old-economy competitors, from publications like the Boston Globe, to the New York Times and the Village Voice — and as events go, old-fashioned event-planning over the phone.

Also, Going’s chief executive Evan Schumacher says no other Web site has done the hard work of engaging with event promoters in local communities. Going, which focuses on answering the question “What should I do tonight?,” has targeted top event organizers in each city and encouraged them to invite their contacts to events using Going. You’ll see some events, like this one for Klaxons, with more than a thousand people responding to the invites and registering. If respondents express interest in going to an event, their photos show at the bottom of the event page, with links to their profile.

As for competition, you’ve got JudysBook, which has yet to have real traction, and Yahoo’s Upcoming.org, which is still larger than Going, but limited to the techie crowd. You’ve got Yelp for information about restaurants and bars, and you’ve got MingleNow, a site that revolves around tequila-filled night clubs, and Down2Night, which is mainly texting event information to your cell phone. You’ve got Zvents for an agenda of events in your region, but much less oriented around people (update: forgot to mention Eventful.com, which is similar). And you’ve got various invite services, but these tend to be more for personal parties or occasions. Facebook’s community is still centered around colleges, even if it has branched out.

Going has hired editors to pick and profile specific events for each city, and then tries to encourage user participation. Any event can be featured, from Playboy parties to art gallery openings and charity events. The targeted community is the out-of-school crowd, broadly the 20- and 30-somethings.

After talking with Schumacher, it’s clear he wants Going to be the Facebook for city events — replicating Facebook’s success of matching online interests with those that exist offline. If it executes, this site could go somewhere, but we’re still not certain how viral such a site can be. After all, the point is not to hang out at a site about events, but to actually go to the events. Screenshots of an event, and a profile, below. 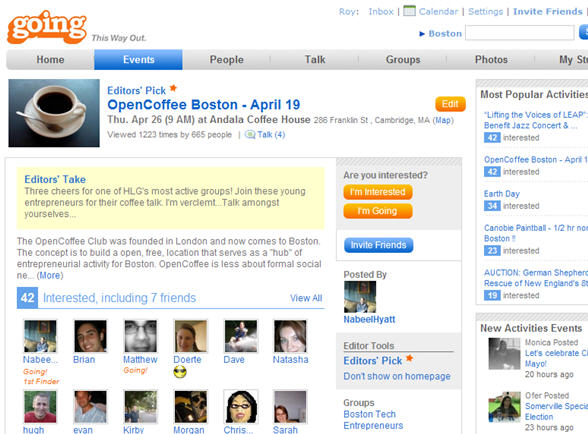 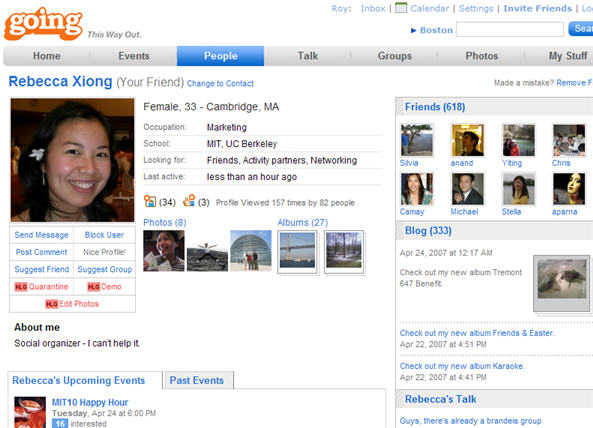