A month after Maykah made its debut on Kickstarter, another inspiring toys for girls company is heating up on the popular crowdfunding website.

GoldieBlox reached its Kickstarter goal of $150,000 after just five days and is currently at $172,000 with just over three weeks to go. The founder is Debbie Sterling (pictured above), a Stanford engineer turned San Francisco entrepreneur. She will use the funds to develop and distribute the construction toys for girls. The mission is to inspire them to grow up to become scientists and engineers.

In the book series and toy, the star is Goldie, a kid engineer who loves to build and goes on adventures where she has to solve problems by building simple machines. Given the success of their first toy, the team behind GoldieBlox is already planning a series with a new set of characters. For little girls, it’s a darn sight more aspirational than Barbie! 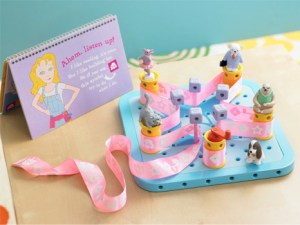 Sterling told me she started GoldieBlox two years ago when a friend, a fellow engineer, complained about the lack of women in their field. Sterling is a graduate of Stanford’s School of Engineering, as are Maykah’s founders, Alice Brooks, Bettina Chen, and Jennifer Kessler.

“My friend attributed her interest in engineering to playing with her brothers’ hand-me-down legos,” she told me. “As soon as she said that, it hit me like a lightning bolt; my mission in life is to invent a cool toy to get girls interested in engineering.”

Sterling quit her full-time job in December to focus on building a toys for girls company. “As soon as that idea struck, I couldn’t think of anything else. I woke up every day only wanting to do that,” she said.

Check out the adorable video introducing Goldie, and the character for the second book.