When Apple launched a new slate of services last year, including News+, TV+, and Arcade, the one that generated the most excitement was Apple Card, the company’s first self-branded credit card offering. Developed in partnership with investment bank Goldman Sachs, Apple Card promised users a “reinvented” credit card experience, eliminating fees, simplifying payments, and delivering “Daily Cash” perks. But for some people, applying for the Apple Card has been an endless exercise in frustration.

While Apple made the application process as simple as possible — open the iPhone’s Wallet app, tap two buttons, and provide a very modest amount of personal information — Goldman implemented an algorithm that either accepts or rejects applicants within seconds. If your application is successful, you’re offered personalized credit terms such as those shown above. If not, you receive an instant rejection letter without an equally fast route to appeal. Due largely to that algorithm, which forsakes human decision-making in the name of efficiency, Apple and Goldman were accused of gender discrimination in the Apple Card approval process last year and have racked up numerous complaints and questions regarding the system’s transparency.

This week, the companies quietly launched “Path to Apple Card,” a program that will let some previously rejected customers demonstrate their commitment to earning the famously fragile titanium charge plate. The pair has also provided more clarity on their approval process through an updated “How your Apple Card application is evaluated” support document and Financial Health page. But since they continue to issue rejection letters that may confuse customers — and are still using that mysterious algorithm to determine Apple Card worthiness — I contacted the companies to clarify what was going on with their system. Here’s what I learned.

Their algorithm is not AI, but it can evolve

As Goldman managing director Andrew Williams made clear, the companies’ acceptance/rejection algorithm is a “pretty simple decision tree,” not AI. This means it’s built to use basic financial metrics to reach a yes or no decision. The key input is a TransUnion credit report, notably evaluated using the FICO Score 9 (aka FICO9) rating system, though the specifics of that evaluation aren’t completely transparent. It also considers your reported annual income to determine how much cash you will likely have left after paying your monthly debt obligations.

Williams emphasized that the Apple Card has been available for less than a year and that the companies are still working to evolve their credit policy and add additional customers. In other words, an applicant rejected last August might be accepted in the future without personally making any changes. But my impression is that the “simple” decision tree won’t change much unless the companies decide to open their gates wider. The “Path to Apple Card” is there to help more people meet Goldman’s prior “creditworthiness” standard, rather than to ease that standard.

So what is the Apple Card acceptance standard?

Goldman’s algorithm appears to rely considerably on your FICO score, which was developed by the Fair Isaac Corporation in 1989 to objectively rate customer creditworthiness. Despite lingering questions about the accuracy of FICO scores and the extent to which they should be relied upon, they’re widely used by credit issuers for approval and rejection decisions. In 2006, the three major credit reporting agencies (Equifax, Experian, and TransUnion) created a FICO alternative called VantageScore, which now uses the same 300 to 850 point scale as FICO but tends to be more generous in calculating ratings. According to the companies, a FICO score of at least 670 or VantageScore of 700 typically signifies “good credit.”

Consumers seeking Apple Cards have to surmount multiple hurdles, but a big one is understanding the difference between these scores, and that there are actually more than two of them. FICO8 is currently the “most widely used version” of Fair Isaac’s popular system, but Goldman uses the newer — not newest — FICO9. If you use a credit monitoring app such as Credit Karma to track your credit ratings, you may find the numbers come from VantageScore 3.0, and there’s a newer version of that, too, called VantageScore 4.0. Four companies pulling the same TransUnion report could see four different scores based solely on differences between the scoring systems and versions.

This leads to perplexing scenarios in which the same TransUnion report viewed by Goldman’s FICO9-dependent algorithm looks numerically worse than what the consumer sees with VantageScore 3.0. Apple’s current Financial Health page says FICO9 scores over 660 are “considered favorable for credit approval,” yet it’s possible that a customer with a TransUnion score of 716 will be rejected and receive an email from Apple saying Goldman’s decision was made based on a score of 682. None of that seems right. And it’s possible to be rejected even if your FICO9 score is higher than that.

Either for regulatory or business reasons, Goldman couldn’t provide clear-cut answers as to how the “pretty simple decision tree” was structured. Armed with numerous MyFICO forum reports, including Apple Card acceptance with a 620 FICO9 score and rejection with scores higher than Apple’s stated 660 threshold, I found that bankruptcy — regardless of whether it’s explicitly named as Goldman’s cause of rejection — appears to place a heavy finger on the scale.

A past bankruptcy likely spells years of Apple Card rejection

The President of the United States has had at least six business bankruptcies, and as the COVID-19 pandemic amply demonstrated, circumstances outside of individual control — an unexpected medical condition or a macroeconomic crisis — can force even an otherwise thriving business or individual into bankruptcy. To the extent that bankruptcy was once stigmatized, national meltdowns and all-too-frequent personal tragedies have largely eroded that stigma. Moreover, it wasn’t that long ago that Goldman Sachs itself took a $10 billion bailout from U.S. taxpayers to resolve its own financial crisis, an ask considerably larger than even the most serious personal bankruptcy filing.

But Goldman’s Apple Card algorithm appears to instantly reject an applicant with a past bankruptcy filing, regardless of their other indicators of creditworthiness. Apple’s Financial Health page says Goldman considers “multiple conditions” before an Apple Card decision is made, with “negative public records” only one of those factors, which sounds reasonable on the surface. But the companies weren’t as transparent about the role a past bankruptcy will play in nixing an Apple Card application until I pointed out that rejection letters were dancing around the issue.

Williams and Goldman digital consumer banking VP Gretchen Silver confirmed to me that a “recent bankruptcy” was enough to prevent a successful Apple Card application on its own. By Goldman’s standard, “recent” is apparently three years, regardless of any extenuating circumstances. This is notably a full year longer than the federal Fannie Mae standard for offering post-bankruptcy home loans and stricter than some popular consumer credit card companies.

When I asked whether the Apple Card’s three-year bankruptcy rule was firm, Goldman’s representatives initially said that applicants rejected due to bankruptcy could keep trying to apply and that each time the totality of the application would be considered. Pressed on whether consumers would keep being rejected until the three years had passed, however, they conceded that this could happen unless the current credit policy evolves in the interim.

Online discussion forums now have plenty of data points on the terms of Apple Card acceptance offers, as well as countless examples of rejection letters that confound recipients. Given that Apple exalts simplicity, there’s something wrong when even credit card mavens can’t understand Apple Card rejections, so the algorithm’s method for explaining its reasoning might also need some fine-tuning.

I asked Goldman’s representatives about apparent inconsistencies and inaccuracies in Apple Card rejection letters. In some cases, a rejection letter may not explicitly identify bankruptcy as the critical issue, preventing rejected applicants from moving on with the knowledge that they won’t be accepted anytime soon. Alternately, a rejection letter might list three reasons for rejection based on the same underlying situation — contradicting an otherwise “stellar payment history” report from Credit Karma, including a multi-year history of 100% on-time debt payments. 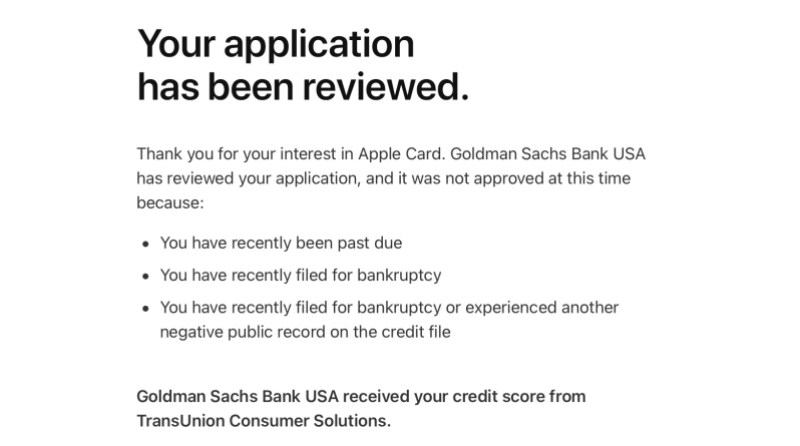 Silver suggested that there may be disconnects between what people see summarized by third-party credit monitoring services and the more granular data Goldman’s system uses to make decisions. As such, a single bankruptcy filing might inaccurately show up twice on the list of rejection reasons and trigger the listing of a third reason that might not be correct. Contacting TransUnion could help applicants resolve some problems, but others are clearly attributable to disclosure issues with Goldman’s automated rejection system.

As I mentioned to Goldman, the underlying problem is over-reliance on a completely automated system for credit decision-making and applicant rejection communications in the name of efficiency. Customers would benefit from having humans involved in the final rejection decision, as well as appeals and error corrections. A human might parse multiple related or identical items on a credit report differently from a computer, take important factors such as past Goldman or Apple customer relationships into account, or fix a rejection letter to avoid confusing or contradictory information. My sense is that this won’t happen anytime soon.

The new Path to Apple Card program is designed to increase the card’s customer base, but Apple and Goldman aren’t publicly advertising the program — it’s open by invitation only. Assuming you get the initial invitation and then successfully complete the program, you’re promised an “invitation to reapply” for the Apple Card.

Path to Apple Card apparently requires up to four months of “personalized steps” and monthly credit reviews. Depending on how the Path is customized for your circumstances, you may be required to make payments on time, lower your debt, and/or resolve past due balances, with the threat of immediate program termination in the event of a new bankruptcy, foreclosure, repossession of secured property such as a vehicle, or an account going to collections or getting charged off. While none of this is hugely onerous, it’s a lot of hoops to jump through for an Apple Card.

Another caveat: It appears you won’t be offered the Path to Apple Card if your personal situation, such as a 2.5-year-old bankruptcy, wouldn’t yield a successful application within the Path’s four-month timeframe. Until and unless something changes with Goldman’s and Apple’s credit policy, the Path will remain somewhat obscure and narrow.

On the one hand, that’s unfortunate, as it’s clear Apple and Goldman have come up with a credit card offering that appeals to a lot of people and has some tangible benefits, particularly for frequent Apple Store customers. Thankfully for those who haven’t been accepted, there are hundreds of other credit cards out there, many of which would accept an applicant with a small or moderate credit limit rather than turning them away or putting them through a gauntlet of advance obligations. Apple Card membership may have its privileges, but if you’ve been turned down by Apple, you’ll still find similar if not better alternatives from other companies.