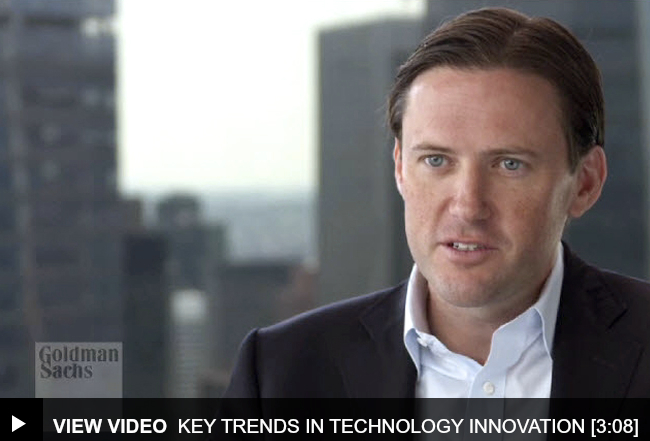 The biggest opportunities for investors are in big data and efficiency.

That’s the line coming from Scott Stanford, the co-head Internet banker of Goldman Sachs, in three videos that apparently have just been posted today. The videos express the bank’s positioning on innovation and where investors should put their money.

Goldman Sachs is one of two or three big investment banks vying for thought-leadership in the technology industry; indeed it’s in cut-throat competition with Morgan Stanley. While Goldman has led deals such as the Yahoo-Alibaba sell-down, the Zillow follow-on, and the Yelp IPO, and was in on the big Facebook IPO, Morgan Stanley scooped Goldman to be lead bank on Facebook’s IPO and has scored other big IPOs, such as LinkedIn.

So it’s always interesting to take note of Goldman’s public stances on the industry, because it has no doubt spent considerable time thinking about it. Stanford, for one, has networked hard in Silicon Valley; I invited him to speak at DEMO two years ago. He’s  also been very active managing the firm’s investments in Facebook, Uber, and Linkedin.

Here are the cliff notes on Stanford’s position:

First, and foremost, it’s about Data.

Third, the rate of innovation is unprecedented.

Here are Stanford’s views on what investors are looking  for:

We’ll update on whether these thoughts get translated by Goldman into new deals over the next year.