“Bots” has become a buzzword.

Anyone near the fledgling industry would probably have agreed this was true for some time now, as bots, artificial intelligence (A.I.), and conversational commerce combine to form a hurricane of hype.

Last Friday, Goldman Sachs joined the chorus of voices calling bots overexposed with this video explanation of bots, part of the company’s Buzzwords series. Other buzzwords, according to Goldman Sachs: “machine vision,” “athleisure,” and “liquid biopsy.”

“Bots are poised for continuing maturation for a couple of reasons. The first is that the channels are in place,” he said. “Messaging platforms are broadly adopted in the U.S. and globally. The second [reason] is that the technology behind bots — machine learning — is really starting to mature and is on a path to continue to mature rapidly over the next few years.”

In a guest post published by VentureBeat two weeks ago, Kik CEO Ted Livingston took a look back at how bots have progressed since Kik, Facebook, and Microsoft opened their platforms to bots four months ago.

“At Kik, we’ve noticed the same thing as everyone else: So far, there hasn’t been a killer bot. This is not yet the world promised by the early hype,” he said. “Then again, we’re only four months into this. The bot ecosystem is at an earlier point now than the App Store was before Apple introduced in-app purchases. The game lasts longer than the first pitch.”

Livingston continued to say that those bullish on bots may look back and see early emphasis on conversational commerce as a mistake because natural language processing and artificial intelligence just doesn’t beat talking to a human yet. He does not believe bots are the new app, at least not yet.

“The point is that people are increasingly spending their time in chat apps, so we’re building experiences inside chat that allow people to do more while they’re there. That’s why bots are so interesting,” he said. 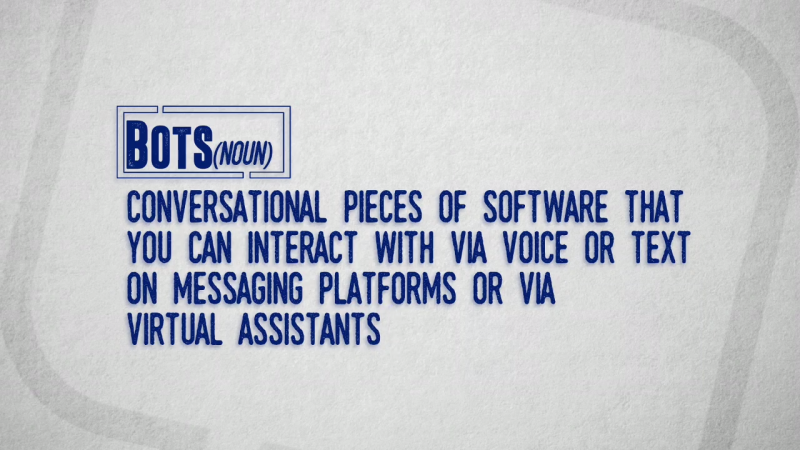 Above: The definition of bots according to Goldman Sachs.

Union Square Ventures cofounder Fred Wilson responded to Livingston’s post with his own article a day later. (Union Square Ventures is an investor in Kik.) Wilson said he now encourages entrepreneurs to pitch bots instead of apps but that, so far, bots have not lived up to their hype.

“New user behaviors take time to develop and sometimes require a breakthrough app to get things started,” he said. “That’s where we are with chatbots. The hype phase is over, and we are now into the figuring-it-out phase. That’s usually when interesting stuff starts to happen.”

Om Malik focused on the hype surrounding artificial intelligence in a piece in the New Yorker late last week.

Malik spoke with A.I. experts to try to get a single definition of artificial intelligence, but he found that the answer varies. Citing futurist Kevin Kelly, Malik concluded that what we consider A.I. today and what we may have considered A.I. 50 years ago or understand it to be 50 years from now will be different.

“If people could have seen our current voice-to-text capabilities 50 years ago, it would have looked as if technology had become sentient,” he said.

Malik believes it will take decades for A.I. to operate truly independently of human handlers. An A.I.-human hybrid will be the norm until then, and so will over-hyped claims about what A.I. is able to do.

Comparisons are frequently made between bots and the beginnings of the app ecosystem or the early days of the web. GameOn CEO Alex Beckman remembers his first months as an app developer after the App Store opened and the iOS software development kit was released.

A lot of apps, including some he made, were just repackaged web pages, he recalled. It took half a year or more for developers to make apps that took advantage of the app interface and moved the needle.

“We know six to 12 months from now it’s going to look very little like it looks now,” he concluded.

VentureBeat’s John Brandon noted in a post last week that ecosystem maturation and the surrounding hype tend to follow a predictable cycle.

First comes the hype, in this case, the declaration by hashtag creator Chris Messina that 2016 is the year of conversational commerce, the opening of platforms by Kik, Microsoft, and Facebook (all within a few weeks of each other), and the rapid addition of new features to accommodate bots, what Josh Johnson of Kik refers to as the chat platform “arms race.”

Microsoft CEO Satya Nadella called bots “the new interface” and a shift as influential to computing as the graphic user interface.

Now comes the letdown from unmet expectations. Eventually, the ecosystem will build to “a state of enlightenment and, finally, productivity.”

“The disillusionment phase happened when people started questioning whether the first round of chatbots really did anything that profound compared to apps,” Nadella wrote. “The ultimate solution? Bots need more intelligence. They need to astound, not just aid, the user.”

It might take years or decades for the A.I. that allows bots and personal assistants to function on their own, but we won’t have to wait that long for conversational commerce to take hold and for people to see the promise of bots.

WeChat, billions of monthly active users, and the potential billions to come are proof enough of that.