IBM researchers and a team in Singapore have taken common plastic and engineered it into a nanomedicine that is 1,000 times smaller than a grain of sand and can be used to attack fungi that are resistant to antibiotics. 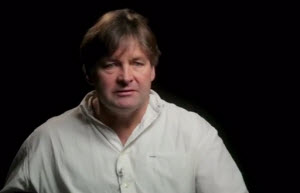 The new nanomedicine represents a broadening of the technology created in 2011 at the IBM Almaden research center in San Jose, Calif., and at the Institute of Bioengineering and Nanotechnology in Singapore to attack bacteria that have also become resistant to antibiotics. The researchers think they can use the nanomedicine, which they vastly improved earlier this year, to target only bad cells within a body and kill them like ninjas assassins. The breakthrough in anti-fungal treatments could be commercialized over time, and it suggest that a technology that started out as narrow cure could become more broadly useful against infections that affect a billion people a year. 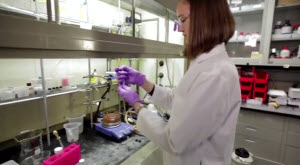 The precise targeting is possible because the researchers can create an electrical charge on the nano particles that is attracted only to the cells of fungi. The nano particles then attach themselves to the fungi and chemically combine with them, ripping their membrane walls, destroying the fungal cell.

The reason it could work well is that it is a physical attack against the membrane of a fungus, not a drug-like attack. It kills the cells before they can become immune to it. 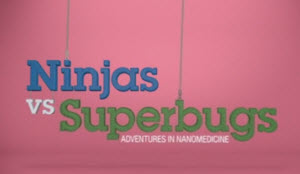 Above: Ninjas vs Superbugs

James Hedrick, advanced organic materials scientist at IBM’s Almaden research center, said in an interview with VentureBeat that the nanomedicine can be made from plastic materials like polyethylene terephthalate into non-toxic and biocompatible materials that are tailor-made to attack a fungal infection, according to a peer-reviewed article that will appear in Nature magazine today. IBM was able to tap research into green chemistry, healthcare, and supercomputing to produce the nano particles.

“This was a continuation of work in the antimicrobial space,” Hedrick said. “It’s a new molecule that fights fungal infections, which are similar to mammal cells in that they are very hard to target. Normally, drugs indiscriminately attack fungi and healthy cells together.”

But Hedrick said the new nano particles are pathogen-specific, going after particular fungi, not healthy cells. In an attempt to make the science more understandable, IBM has labeled the research as a battle of Ninjas vs Superbugs. 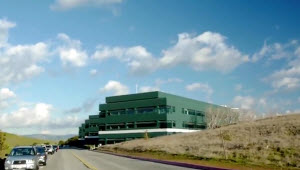 Alexander Fleming discovered penicillin in 1928, starting the age of modern antibiotics. But as early as 1947, or four years after penicillin use became common, we began to see bacteria developing a resistance to antibiotics. As we used more and more antibacterials and antibiotics, strains of bacteria evolved into Superbugs, which are resistant to treatments. Those Superbugs include CRE bacteria, Clostridum difficile, and Methicillin-resistant Staphylococcus aureus (MRSA), commonly known as staph. MRSA cells can grow to a colony of more than 1 million cells in less than a day. As many as 2 million Americans suffer from antibiotic-resistant bacteria every year, and 23,000 die. 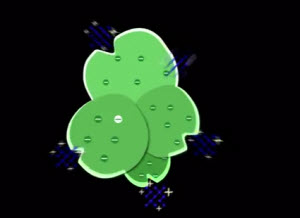 Above: Ninja attack against a Superbug

Over 1 billion people are affected by fungal infections every year, ranging in severity from topical skin conditions like athlete’s foot to life-threatening fungal blood infections. These infections happen more often when the body’s immune system is weakened by illnesses like HIV/AIDS, and cancer, or when receiving antibiotics. Traditional antifungal therapeutic drugs have to get inside a cell to attack the infection, but they have a hard time penetrating the fungi membrane wall. And drugs have a hard time differentiating between the fungi cells that are similar to mammal cells. 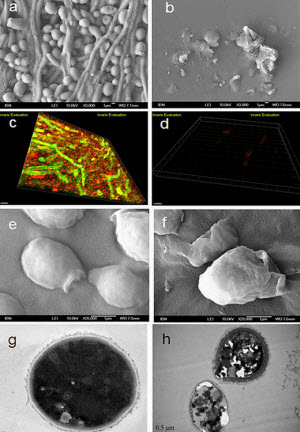 Above: Closeup of IBM’s nanomeds in action

Besides athletes foot, Hedrick believes the nanomeds will work against the fungi that grow on contact lenses and prevent you from wearing them after a short time. These kinds of fungi grow on a lens or catheter and make it easy for you to get a fungal eye infection. That’s a huge problem. The researchers in Singapore found that, after treating mice with such infections, they could kill the fungi effectively.

The IBM scientists developed an organic catalytic process to transform plastic bottles into new nanofiber molecules, nicknamed Ninjas, that target and kill the Superbugs, bacteria and fungi alike. The Ninjas have been designed to carry a negative electrical charge. They are drawn like magnets to the positively charged surfaces of infectious cells like MRSA. Once attracted to the fungi or bacteria, the Ninjas pierce the cell membrane and the contents of the cell spill out. The cell is destroyed and the Ninjas safely biodegrade and disappear without harming any healthy cells.

“It rips the membrane out in a physical attack,” Hedrick said. “It’s kind of like popping a balloon. We don’t put them to sleep like most drugs do. We kill them. That is why it is so effective. And they can’t adapt to a physical attack. They can adapt to drugs.”

IBM found this technology when exploring new ways to etch silicon wafers used in semiconductor chips. The researchers identified a new kind of plastic that produces an electrostatic charge when chained together. They realized that if they could manipulate materials at the atomic level to control their movement, they could translate the results to nanomedicine. The new agents do just that, self-assembling themselves through a hydrogen-bonding process. They stick to each other like molecular Velcro in a polymer-like fashion to form nanofibers.

The technology is still in the lab, but IBM’s goal is to use it to attack Superbugs including MRSA and cancer. Since IBM can embed these medicines in hydrogels, they can be turned into coatings for antibacterial wipes or put into treatment creams. They can even use it to create hygiene products like deodorant or toothpaste.

IBM started the nanomedicine polymer program just four years ago, leveraging its expertise in chip materials. IBM will team up with a variety of partners to bring the nanomedicine to the market.

“We’re bringing this to market as fast as possible, but it’s hard to say when because of the stringent regulations we have to meet,” Hedrick said.

This video explains how Ninjas are taking on Superbugs.

Here’s a video about how IBM researchers are attacking the problem, and explaining the solution with 3D-printed puppets.