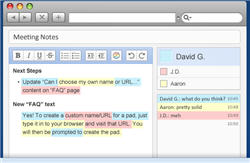 AppJet’s EtherPad collaborative browser-based word processor is, many people say, much easier to figure out and use than Google Docs, with a much more intuitive, attractive user interface. Talk is cheap, but Y Combinator-funded AppJet, founded in 2007 by former Google employees here in San Francisco, has proven itself by getting a small number of customers to pay $8 a month for its Professional Edition, which adds features aimed at small-company office workers.

And this morning AppJet announced on its company blog that it’s been acquired by Google for an unspecified amount. Here’s some advice for Google: Let the AppJet team overhaul not just Google Docs, but the intractable, needlessly complex Google Wave real-time collaboration tool.

Google seems to believe that Wave is the online application that will eventually replace Microsoft Office. But compared to Office, Wave is messy and hard to figure out. It gets plenty of praise from geeky bloggers, but there’s an axiom that’s often forgotten in the tech world: Geeks like puzzles. Most people don’t.

EtherPad has almost zero puzzle factor to it. Hopefully Google will let AppJet bring that kind of mass-market friendliness to Wave.

p.s. readWriteWeb editor Marshall Kirkpatrick’s entertainingly cynical take on the wording of the announcement is a good read.