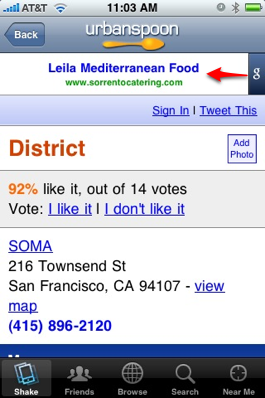 [Update: I just got off the phone with Urbanspoon creator Ethan Lowry. He confirmed that his company and Google have just begun testing these ads. It’s still too early to say how Google’s offering compares to those of other mobile application developers, but Lowry says that integration was relatively easy.]

When you click on an ad, you’re directed to a webkit view of information about the advertiser within the application. Then you can go to the advertiser’s web page. In the screenshot, you can see an ad for a Mediterranean restaurant.

The ads don’t seem to be working very well, though. They’re not targeted to the right city in some instances we’ve seen.

Google already offers mobile advertising, including ads that appear within the iPhone mobile web browser. It has separately experimented with advertising on social networking applications, like apps in Facebook. So this effort isn’t surprising.