Two days ago, Google announced it would finally support the most popular computing language on the planet, PHP, in its platform-as-a-service offering, Google App Engine.

That means that yes, at some point you’ll be able to run your little WordPress-powered blog on the biggest server farms on the planet. But it also means that major companies will be able to use Google’s famously reliable services to run their enterprise-scale “big data,” backend, and, yes, consumer web projects, all in the PHP language that that is increasingly penetrating corporations.

I talked to one of the three founding fathers of PHP and current Zend CEO, Andi Gutmans, about the implications for PHP.

It’s a busy time for the Gutmans, the open-source programming language, and Zend, the company Gutmans formed to offer commercial support and tools for PHP. Engine Yard just recently added PHP to their Platform-as-a-Service as well. And Zend is expanding quickly in the enterprise as it has recently released integrated development tools for cloud-enabled mobile applications.

But Gutmans, though busy, is thoroughly upbeat.

VentureBeat: Did Google talk to you before adding PHP to Google App Engine? 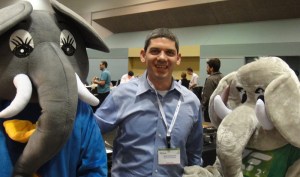 Andi Gutmans: I don’t know how to answer that. I was aware that they were going to make that announcement … I’ve worked with the product manager on the project before.

But in the past few months, there’s been a real attitude from Google that we’re going to go and compete with Amazon and with Microsoft, and we’re going to do it all fronts. They’ve become very aggressive on differentiating on performance and billing.

VentureBeat: What does this announcement say about PHP?

Gutmans: We have internal jokes about PHP’s web penetration and have used the stat that PHP runs 39 percent of the web because it was the only number we could get from Netcraft.

But I love Google’s stat, that 75 percent of the web runs PHP. No one knows the web better than Google.

If they’re trying to gain market share and gain it quickly, there’s no other language to do it with. And this is the first non-Google language they’re supporting.

VentureBeat: How’s that feel? And how are your customers reacting?

Gutmans: I’m definitely excited about it.

When any player does something like this — especially Google — it’s a huge validation. We got emails from some of our largest customers, saying this is great … it gives our enterprise customers a higher sense of confidence. And that stat that 75 percent of the web runs PHP is great for Zend — anything that is good for PHP, by proxy is good for Zend.

In addition, they said that PHP was their top-requested feature, which means the developer community was very supportive of us.

VentureBeat: Will you offer Google App Engine Support within Zend Studio, so developers can publish to Google right from within their Zend development environment?

Gutmans: We don’t know yet … it’s early and we’re exploring what kind of relationship we can have with Google.

We do support Google Compute Engine — that’s a full integration and some of the larger companies who run PHP already use it — but Google App Engine is just launched, it’s still in experimentation mode.

VentureBeat: What took Google so long to add PHP support?

Gutmans: I can’t speak for Google, but my assumption is that I felt that Google App Engine in the first few years was something they knew they wanted to do really well but … they kinda went down the simple easy route.

But we’ve seen a significant acceleration in the past 12 months. This will be a $20 billion market by 2016, and they moved from testing the waters to being very very aggressive right now.

We recently surveyed 5,000 PHP developers, asking them where in the cloud do you think you’ll deploy. Fifty-one percent said Amazon Web Services, but Google was 21 percent … and we just support Compute Engine right now.

It wasn’t even on the list last year, so that’s a big jump.

VentureBeat: What does this mean for the little guy building in PHP or hosting a WordPress blog?

Gutmans: I think it gives another option for the guys who do the small stuff, who are using shared hosting for $20/month.

What’s really great for the small developer is that it’s a nice value proposition — you can start at a lower cost. And, it’s a modern platform versus shared hosting, which is quite constrained.”

VentureBeat: So what does this mean for PHP overall?

Gutmans: The number of requests that Google got from developers was very very significant. It exemplifies what we’ve been talking about … that PHP is very broadly adopted, but also by enterprise.

And that is driven by web, mobile, and cloud, which is where PHP’s sweet spot is. We’re seeing a strong tailwind behind us.