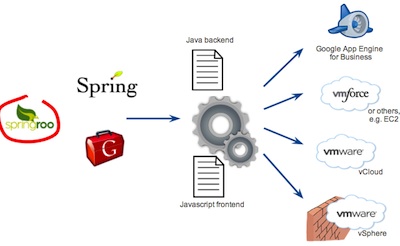 Google is expanding the reach today of App Engine, its platform for Web applications. It’s announcing a new version called App Engine for Business, where big companies can build applications for use by their employees.

Eric Tholome, director of product management for Google’s developer tools, said App Engine for Business provides the infrastructure for “traditional internal horizontal apps” used by enterprise workforces. By using the cloud, applications will only take up the resources that they need, and IT administrators don’t need to worry about unexpected spikes in usage. To make that App Engine ready for business, Google will include new features like SQL databases, a console for managing all of your company’s apps, SSL security for remote access, and a 99.9 percent uptime guarantee.

The most promising part of the platform, however, is probably Google’s partnership with VMware. The idea is to finally remove the worries of “lock in” surrounding all these cloud platforms, where it’s difficult to run an application on, say, Google’s platform and Amazon’s, or to move an app from one platform to another. Google and VMware developers can build applications using the popular Java language and then launch them on multiple platforms with just a few minutes of work, the companies claim.

The applications can be built using Java development tools VMware obtained through its acquisition of SpringSource (including the SpringSource Tool Suite and Spring Roo) as well as Google’s Web Toolkit. Then the applications can be launched on App Engine for Business, VMware’s vCloud and vSphere environments, or on VMforce, the previously announced partnership between VMware and Salesforce.com.

That broad vision of application portability is nice, but that doesn’t explain why a developer would want to choose App Engine in particular.

“We all expect the different players idfferentiate a number of axes,” Tholome said. “We built App Engine on the same infrastructure that powers Google.”

He also pointed to Google’s ability to scale different kinds of storage, and said it will be adding other services to App Engine.

App Engine for Business is being demonstrated on-stage today at the Google I/O conference for developers and is launching in preview mode. It will cost $8 per user per application per month.