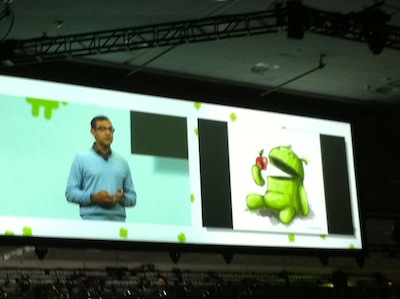 Google executive Vic Gundotra continued his pattern of snarkiness towards Apple at today’s Google I/O conference in San Francisco, where his presentation included an image of Google’s Android logo eating an apple (which I’ve included in this post). So one of the reporters at the conference followed-up, asking how much the Android team is actually thinking about the iPhone on a day-to-day basis.

Gundotra didn’t exactly backpedal, but he didn’t take an overtly confrontational tone either. He tried to paint the jabs he took at Apple today and in the past as fun, saying, “We try not to take ourselves too seriously.” Obviously there’s an element of competitiveness, but he argued that it only “inspires” both teams to work harder.

“It’s great to be in a battle for the hearts and minds of developers,” Gundotra said.

Speaking of the battle for developers, Google highlighted some milestones in Android activations and app downloads earlier today.