Google has announced a handful of Google Play policy updates for developers as it looks to tidy up the Android app store and make it more child-friendly.

The move comes shortly after a new report found that Google Play is awash with apps packing unsavory content and yet marked as safe for children.

Google’s latest ploy to get developers to adhere to its age-rating policies is to get them to “thoughtfully consider” whether children are part of their target audience, said Google Play product manager Kanika Sachdeva, in a blog post.

If children are part of an app’s target market, the developer is asked to ensure that the app meets Google’s policies for handling personally identifiable information and serves ads only from a network that complies with Google’s family policies. Google also wants developers to ensure that their app is not marketed at children if its content is actually designed for adults.

“We will double check your app marketing to confirm this and ask you to make adjustments where required,” Sachdeva added.

The first set of questions relates to the target age group, which is broken into categories ranging from 0-5 all the way to 18+. If children aren’t part of the app’s target market, that process should be quick. But if children are included, then follow-up questions will be asked to determine the content of the app, advertisements, marketing, and more. 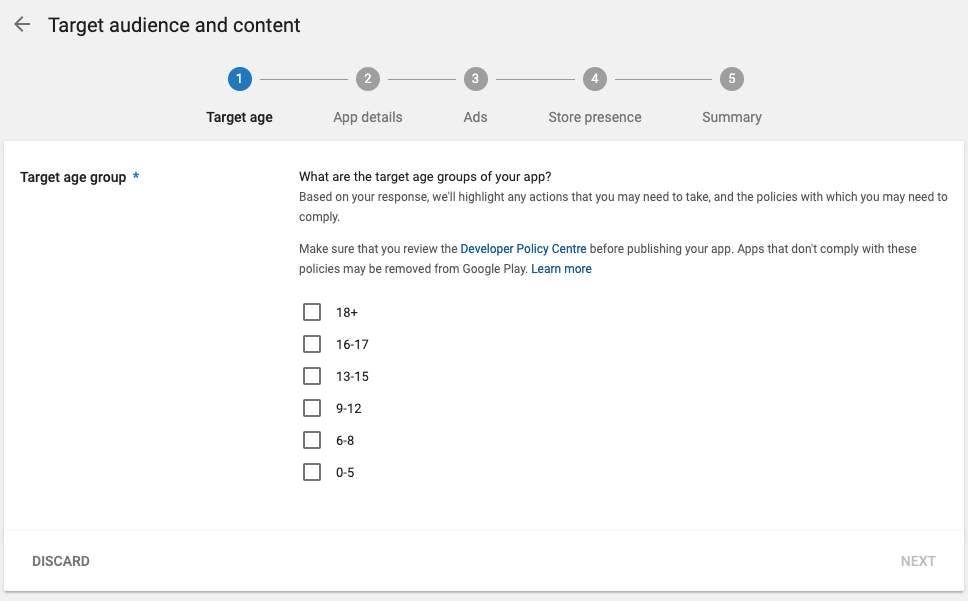 Above: The target audience and content section of the Google Play Console.

So this move is about making sure developers have read and understand all of Google’s policies and — crucially — have a chance to make adjustments to existing apps.

All new apps submitted to Google Play from today will be subject to the target audience questionnaire. From September 1, 2019, developers will also need to complete the form in relation to existing apps.

Google has courted significant controversy over the years for the way it monetizes children on its platform. This has included serving inappropriate videos and ads to children in the YouTube Kids App and targeting kids with ads in the main YouTube app.

Last year, a coalition of child privacy, consumer, and advocacy groups filed a complaint with the U.S. Federal Trade Commission (FTC) alleging that YouTube violates child protection laws by serving targeted ads through YouTube to children under the age of 13.

The company has introduced a number of initiatives to try to clean up Google Play’s reputation, including Family Link, an Android app that lets parents control their kids’ device and app usage.

These latest updates could be a superficial attempt to combat recent negative press and curry goodwill with parents and privacy groups. But Google insists the self-vetting process won’t be entirely developer-led — it’s complementary and will be used in conjunction with existing internal review systems that analyze marketing to categorize apps. Google said it will apply policies based on three distinct age groups: children, children and older users, and older users.

“These policy changes are intended to help ensure that apps for children have appropriate content, safe ads, and handle personally identifiable information correctly,” Sachdeva said. “They also reduce the chance that apps not intended for children could unintentionally attract them.”