A new undersea cable designed to deliver 60 terabits-per-second (Tbps) of bandwidth across the Pacific Ocean is scheduled to begin service after almost two years in the works.

A consortium of companies consisting of Google, China Mobile International, China Telecom Global, Global Transit, KDDI, and Singtel back in August 2014 unveiled their plans to create a 9,000km transpacific submarine cable system spanning from Japan in the east to Oregon on the west coast of the U.S. There are three landing points — two in Japan (Chiba and Mie prefectures) and one in Oregon. 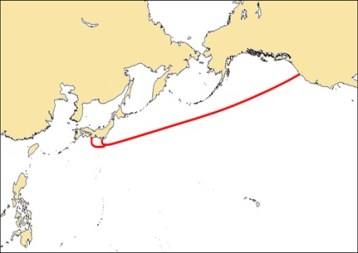 The work and end-to-end testing has been completed, and service will begin tomorrow (June 30).

The cable system, which goes by the name of ‘Faster,’ is touted as the “first transpacific submarine cable system designed from day one to support digital coherent transmission technology.” It uses low-loss fiber and the latest digital signal processor to deliver its promised 60Tbps bandwidth.

“From the very beginning of the project, we repeatedly said to each other, ‘faster, Faster and FASTER,’ and at one point it became the project name — today it becomes a reality,” said Hiromitsu Todokoro, chairman of the Faster management committee, in a press release. “This is the outcome of six members’ collaborative contribution and expertise, together with NEC’s support.”

Given that the cable hooks into the U.S. West Coast, this introduces the possibility of super-fast connectivity for many major conurbations, including San Francisco, Los Angeles, Seattle, and Portland. And, of course, it also opens up major Japanese cities and other locations across the broader region.

“This epoch-making cable will not only bring benefits to the United States and Japan, but to the entire Asia-Pacific region,” said Kenichi Yoneyama, project manager for Faster at NEC’s submarine network division.

This isn’t the first investment Google has made in undersea cabling — it previously invested in another transpacific system, called Unity, that was completed in 2010, in addition to the pan-Asia SJC system that went operational in 2013.

Other tech companies have invested in undersea internet infrastructure, too — just last month, Microsoft, Facebook, and Telefonica subsidiary Telxius announced plans to build a new submarine cable across the Atlantic Ocean, with endpoints in Virginia Beach, Virginia and Bilbao, Spain.

Ultimately, companies that rely on their customers being connected are pushing to ensure that those customers can get online with minimal friction — and this effort extends far beyond submarine cables. Last year, Google confirmed plans to become an MVNO, a service that later materialized as Project Fi, which opened to anyone in the U.S. a few months back.

Elsewhere, Google has also been working on its own superfast Fiber broadband service, which has been rolling out gradually across the U.S.. The company has also been testing balloon-based internet through Project Loon as part of an effort to get remote areas of the world online.