Google’s Stadia cloud gaming division has acquired Typhoon Studio, a Montreal-based triple-A game development house. The move is part of Stadia’s plan to double down on internally produced talent to create exclusive content for the Stadia platform, which launched in November for early adopters.

Jade Raymond, the vice president of Stadia Games and Entertainment, said in an interview with GamesBeat that the goal of the team and Stadia’s first-party group is to create “platform-defining exclusive content.”

Typhoon Studios’s founders are Reid Schneider (former head of production for Warner Bros. Games Montreal) and Alex Hutchinson (former creative director for Assassin’s Creed III and Far Cry 4), and their first game is the upcoming Journey to the Savage Planet.

Typhoon Studios has built a team of industry veterans who are committed to the player experience. The Typhoon team will become part of another Stadia Games and Entertainment studio that is based in Montreal, with Sébastien Puel as the lead. He’s another Ubisoft veteran.

“We’re super-excited to be able to be working with this crew because they’re a team that has done amazing work on amazing games,” Raymond said. “They worked on everything from Batman to Assassin’s Creed. And the original Splinter Cell, which Reid led as executive producer.”

Typhoon Studios will continue to work on the launch of Journey to the Savage Planet for the consoles and PC on January 28, 2020. 505 Games is the publisher, and Google’s acquisition doesn’t include this project. Journey to the Savage Planet is a two-player co-op game set in a science fiction universe. I played a demo earlier this year, and the planet has a colorful art style and bizarre creatures. Hutchinson said that it will be exciting to be able to access more technology and capital at Google on much bigger, more ambitious games that Stadia will publish.

“It’s a small indie studio but built by industry veterans who shipped a lot of your favorite triple-A [games],” Raymond said. They’re about to ship Journey to the Savage Planet, which is coming on January 28. It’s a game that they made with a team of 25 and under two years. They built up a studio and shipped something pretty amazing.”

I interviewed Hutchinson multiple times, including when he was creative director on Ubisoft’s Far Cry 4.

“They have a very tight-knit team that managed to ship what looks like a pretty awesome game in a very impressive amount of time,” Raymond said. “And this will give us a big head start in our Montreal studio in terms of having a team that’s ready to really push innovation. It’s our very first first-party studio that will help drive exclusive games for Stadia.”

Google is just beginning to make bigger investments necessary to rival other platform owners, such as Sony, Microsoft, and Nintendo.

“We plan to have multiple projects going on in Montreal,” Raymond said. “We’re not ready to talk about the specific people or what it is we’re working on. But we have under Sebastian Puel, who is the general manager of the Montreal studio. We’ve already recruited a core team here that’s on site. Alex and Reid and the team that they’ve put together is really a triple-A team. They’ve done an amazing job of really recruiting not only the best people, but creating a great culture where all those people are part of the team and working really well together. They’re a team that share our values, and their team already has a great working relationship and can get up and running fast.”

It’s going to take a lot more investments in order to make Stadia competitive with its rivals, and a lot of that responsibility falls on Raymond’s shoulders. But it’s early still, as Google announced it in March 2019, and debuted the initial cloud gaming service with 22 games in mid-November. Google continues to add more games, and it will launch a broader service with more content in the coming months.

“A lot of people commented on this, saying, ‘We’re waiting for the Breath of the Wild,'” Raymond said. “The data center is your platform, and this is what first-party teams are going to be doing.”

Schneider and Hutchinson are inspired to work on new cloud-based games for Stadia. 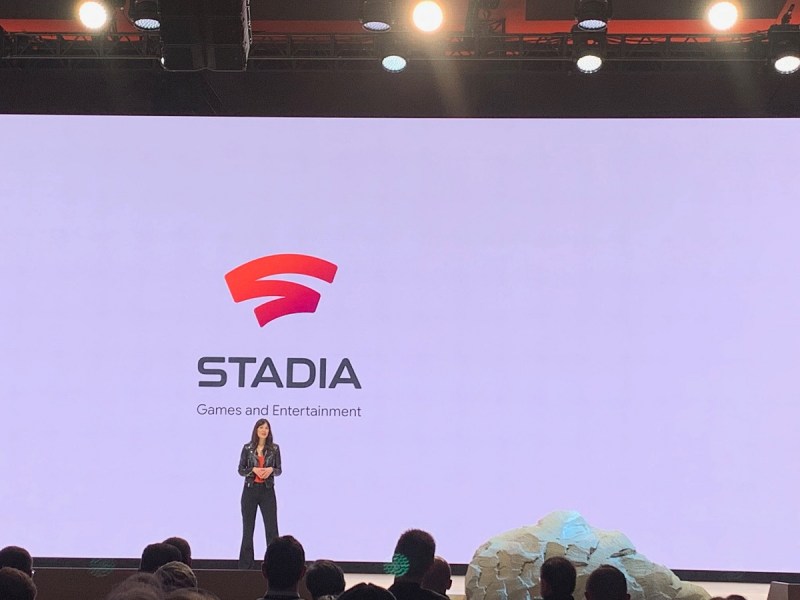 Above: Jade Raymond at Stadia launch in March 2019.

“One thing that’s really exciting to the team is the opportunities to build something really innovative and really new and focused on one awesome platform,” said Schneider in an interview. “The most exciting thing from my point of view is that, with the cloud, the new technology allows us to think at a bigger scale than we had before. The opportunity space is so much bigger. We’re excited to hit the ground with our team and work with Jade to figure out how far we can push it.”

Raymond said the first-party team at Stadia will work on making the platform stand out from others. Many reviewers said that Stadia not only needs more exclusive content and also must exploit features, such as Google’s YouTube social video technology and features that will let gamers join the streams of influencers and pop right into a game.

“I think people are very excited as much as we are to get those features built into games,” Raymond said. So we’re thinking about all of those features definitely as the core and we’re working pretty closely with YouTube gaming and the influencers that they have there to get input on those kinds of things that are going to be the most interesting and the most innovative. But it’s cool, now we’re launched and so it’s a live service. And, you know, we’re adding new features every week. And it’s nice to be out there and outside of the paper world with real players giving that feedback and being able to react to that.”