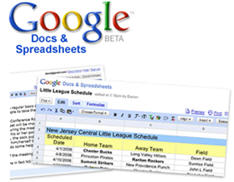 Google has just acquired Zenter, software that aimed to be a web-based Powerpoint-killer.

Zenter built the application in just a few months, and the company was one of the more dynamic Y Combinator-backed companies from this past winter: The founders also patented the software they built. It’s little surprise that the company has just been snapped up by Sam Schillace’s application division at Google.

The site itself offers features as a large library of web-based fonts as well as vector art (in this case, tools for stretching, coloring and otherwise altering images). It combined the desktop-quality interface of Microsoft’s Powerpoint with the power of the web. The company has also been developing ways for users to share artwork and the presentations themselves, and take audience polls during presentations using the software.

The two founders, Wayne Crosby and Robby Walker, have geek cred: PhD’s in computer science, years of experience building systems for companies like Go Daddy, and a Sudoku site that gets millions of views per month. Google employees told VentureBeat they are more worried about entrepreneurs in their garages than larger rivals up and down Silicon Valley’s Hwy 101. In fact, Google also bought another small powerpoint startup, Tonic Systems, in April.

The ending is auspicious for Wayne Crosby. One of the older Y Combinator founders, Crosby had chosen to move out to Mountain View, Calif., for the YC session this winter, while his pregnant wife stayed home in Arizona. Milo was born on May 7th. A quick flip of a company is a nice way to start a family.

Also worth noting that Evan Williams was an early investor, as he blogs here — another company from him to Google.

[Full disclosure: Author Eric Eldon’s company participated in the Y Combinator program with Zenter. He is personally happy for them. His company is called Writewith.]