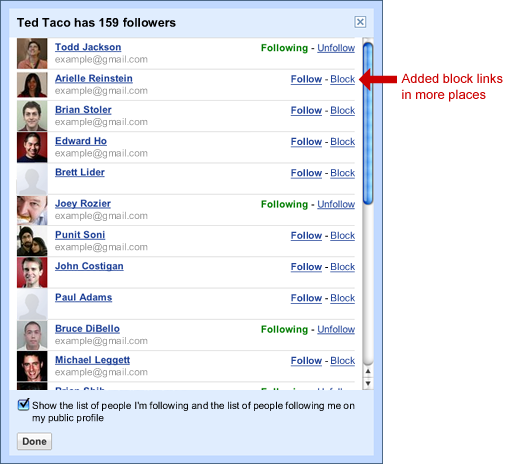 After launching Google Buzz two days ago to a world curious to see whether the search giant could execute social applications well, the company has made a few tweaks amid privacy criticism. So far, Buzz has attracted 9 million posts and comments and 200 posts per minute from mobile devices. That’s about 7.5 percent of how many status updates Facebook handles in the same time period on average, excluding comments and other types of shared content. Good for a debut? It’s decent.

The major privacy problem with Google Buzz was that it outed people’s most frequent e-mail contacts as their followers on the service. Evgeny Morozov raised the very valid concern that for online dissidents in authoritarian countries like China, this loophole could jeopardize the freedom and safety of many people.

The second privacy concern was that it was hard to block people you didn’t want following you.

Today, Google said it has made several changes: It’s made the option to hide your contacts a lot more visible. It also made links for blocking Buzz followers available on the profile page. And it’s made it clearer which of your followers have public profiles and which of them have private ones.

Unfortunately, Google released the blog post about the changes before it launched the changes themselves, so none of these options are available to me now. Let’s hope it doesn’t dawdle.