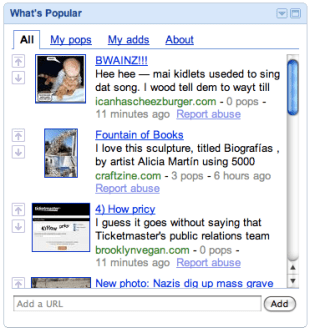 Google has quietly released a gadget called “What’s Popular” that closely models crowd-sourced aggregator sites like Digg, Mixx and Reddit. The widget appears on your iGoogle homepage as a stream of headlines and links culled from across the web that you can vote up or down. The major difference is that your stream is customized based not only on other users’ rankings (upvotes are called “pops”), but also on their behavior on sites like Google Reader and YouTube. It is also partially shaped by the links you personally submit to the gadget.

Incidentally, the launch of What’s Popular coincides with a story on a possible new version of Google News — or rather an intelligent news distribution tool that would serve articles tailored to users’ interests. At first glance it seems like What’s Popular would fill this gap for the search company. But on closer inspection, one really has very little to do with the other. The news platform — which may or may not actually be in the works — would deliver articles from established sources like the New York Times, not the blogsophere; it would personalize users’ news streams based on their past behavior, not on crowd-sourced data; and finally, it wouldn’t be integrated with iGoogle, which has only attracted a fraction of Google’s userbase (all of this, according to a conversation that TheWrap reporter Sharon Waxman says she had with chief executive Eric Schmidt).

When you look at What’s Popular on its own, it’s questionable how useful it will be for most readers. Yes, the algorithms at play are unique and could lead users to new, interesting content — much like similar service StumbleUpon. And it does make it easier for even casual users to submit their own links on a whim. But it lacks a commenting interface and the sense of community that has made sites like Digg and Reddit so popular. People don’t just want to define their preferences, they want to discuss them. The gadget will also no doubt be hobbled by iGoogle’s limited following. In short, there’s no reason why What’s Popular would lure users away from Digg and its ilk — the value-add is meager and the other brands are too powerful at this point.

Google expressed interest in buying Digg last year. With no deal in sight, it now seems keen on competing with it. But if it really wants to throw down the gauntlet, it has to do better than What’s Popular.