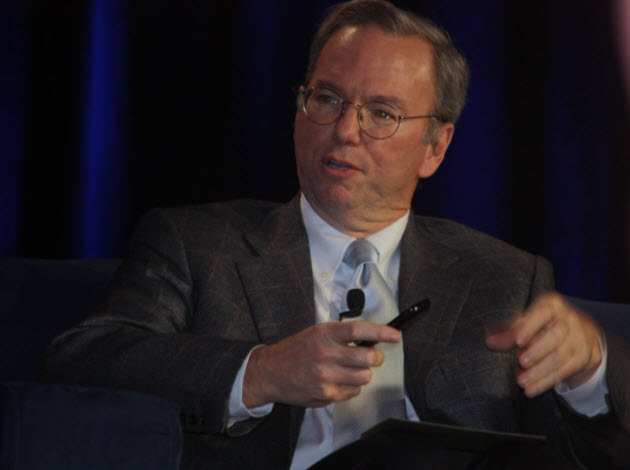 Google chief executive Eric Schmidt gave gadget fans a rush today when he showed off an unannounced Android phone — which definitely looks like the rumored Samsung Nexus S — with a cool new mobile communications technology. Dubbed near-field communications, the technology lets you wave a cell phone over a reader and use your phone to pay for something. 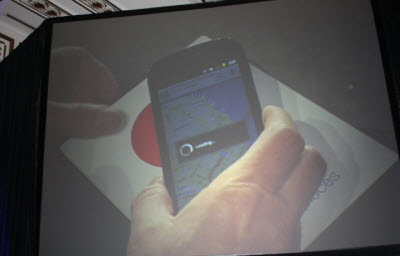 Near-field communications chips are built into Japanese cell phones. But the technology has been very slow to take off in the U.S. Part of the reason is that so many merchant locations have traditional credit card readers in place and are loathe to upgrade the 1970s technology without a clear benefit.

Schmidt made the announcement in an opening talk with John Battelle and Tim O’Reilly at the Web 2.0 Summit today in San Francisco.

The fact that the upcoming Google Android phone, which will be made and sold by unnamed Google partners, has near-field communications built into it shows that the chicken-and-egg problem may be overcome soon. After all, a phone maker wouldn’t add the unnecessary cost of the near-field communications chips if it felt there wouldn’t be any readers around to read them.

Schmidt said that the new phone would run the upcoming Gingerbread version of the Android operating system. Asked when Gingerbread would arrive, Schmidt said a few weeks. He wouldn’t comment on the name of his phone and stressed that the company did not plan to do a Nexus Two phone (but it seems there’s room for other Nexus devices).

Update: Video of Schmidt’s panel has been uploaded. Check it out below:
[youtube=http://www.youtube.com/watch?v=AKOWK2dR4Dg&w=630&h=380]