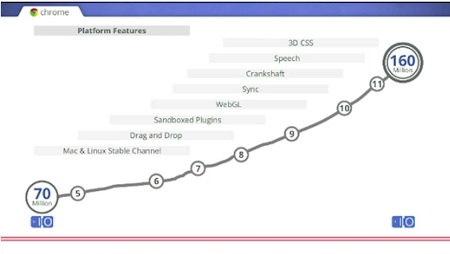 Google today shared some big numbers for its Google Chrome Web browser at its Google I/O conference in San Francisco. At the last I/O conference a year ago, the company said it had 70 million active users. Now it says that number has more than doubled to 160 million — not only is that super-fast growth, but it also suggests Chrome has transitioned into a product with a mass audience that Web developers should be thinking about.

Looking over the past year, Google’s Sundar Pichai also talked about how Google has ramped up its release cycle for Chrome, aiming to release a new version every six weeks so that “the version number doesn’t matter,” which he said is important to users and especially to developers. At the last I/O, Chrome was still in Windows-only beta testing for Chrome 4. Google has released eight new versions of Chrome since then, and is now in beta testing for Chrome 12.

The browser first launched in September 2008. During its most recent earnings report, Google said that it’s spending heavily to advertise Chrome and talked about how Chrome pushes Web technologies forward and creates an optimal environment Google applications.