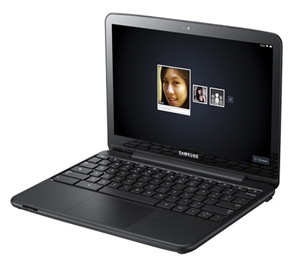 Google’s “Chrome team elves” have been busy prepping for the holidays and will be celebrating with an update to the Chrome OS and a price drop on Acer and Samsung Chromebooks to $299, the company announced.

Google’s foray into “Chromebooks” — basically Chrome OS-based netbooks with some additional functionality — hasn’t been as smooth as its move into smartphones with Android, which has spread like wildfire through the mobile world — Android is now the top OS worldwide. But Google isn’t giving up on Chromebook just yet, and the update to the Chrome OS — which is centered completely on web apps — shows that the Google team wants to keep finding new ways to innovate the laptop OS experience.

The update to the Chrome OS is the main addition Google points to in a blog post today. Google said it has streamlined the already-simple user interface with a new login screen, a revamped “New Tab” page that looks like the Chrome browser, and there are new shortcuts to the File Manager and Chrome Web Store.

Additionally, the company said its Chromebooks from Acer and Samsung would now be available starting at $299, the lowest price we’ve seen on Chromebooks. The $299 models will be available “beginning this week” from Amazon, Best Buy and Tiger Direct. At present, the price changes are not shown on the seller sites, except for the $299 Acer AC700-1099.