A Google application that builds walkable tours of city (or country) attractions has been significantly upgraded to make it much, much easier to use.

Google City Tours, one of the in-progress projects on the Google Labs site, has been overhauled to l0ok, feel and work a lot more like Google Maps. A Google software engineer who blogged about it from the company’s Zurich office calls the upgrades “a whole bunch of small user interface improvements.” What he should have said is, “Finally, finally you can figure it out.”

City Tours has been upgraded on three fronts. First, it now includes complete walking directions and times for tours. The tours can be customized to a specific day and time, and Google will modify the tour to avoid sending you to sites it believes will be closed at that hour. 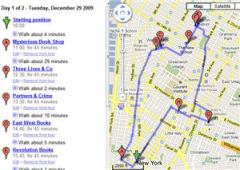 Second, City Tours now allows anyone to import their own map points and tour paths. Other users can then call up that tour to relive it, and customize it to the date and time of their planned visit. For example, this walking tour of New York bookstores tells you to plan on spending 45 minutes at Patners & Crime and won’t send you to the Mysterious Bookshop after 7 PM..

But the best news is that City Tours is now what user interface wonks call “intuitive” for users who’ve spent any amount of time playing with Google Maps. The City Tours engineers tweaked their custom interface so that it emulates a regular Google map as much as possible. (Still missing: the Print / Send / Link buttons that make it so easy to embed a Google map in a web page or email.) Compared to, say, Facebook, where every control is as unique as a snowflake, using City Tours is a breeze.