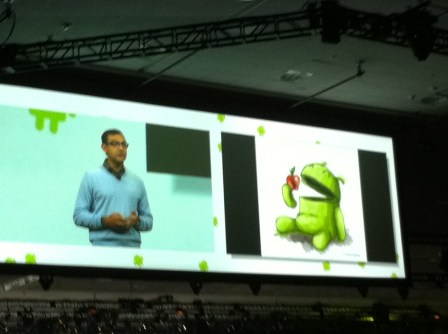 The cloud player is basically what everyone expected it to be — a way for Google users to upload music to a remote server and access it from other devices. An independent PC or Mac-enabled application uploads music with a remote cloud server. Users can then stream the music through the Internet to other mobile devices like smartphones and tablets.

The web interface is similar to Grooveshark, an online music player that lets users search a remote server for individual songs and play them. Users can go through their library and play individual songs and create custom playlists. Users can also select songs to create a genius-style playlist that adds songs with similar tonality or other musical features based on a machine learning program — similar to the algorithms Last.fm and Pandora use to help users find related songs.

Music Beta automatically caches recently downloaded songs to mobile devices, which means users can listen to the songs without access to the Internet. Google didn’t get into specifics about cloud synchronizing, but it looks like users can download music to mobile devices over the air — which means they won’t have to connect the devices to a computer to download new music to the phone.

Users can synchronize up to 20,000 songs onto a cloud-based music server. The service will be free for users while it’s still in beta and will be available to U.S. residents initially. The company did not give any kind of time frame as to when Music Beta would be available for international users. The new service gives Google an advantage over Apple, which has yet to release its expected cloud-based music player.

Google plans to slowly unroll the new service in the United States in another closed, invite-only beta program similar to Gmail. That worked well for the company the first time around because it turned Gmail users into an exclusive club of sorts and let Google roll out the app at its own pace.