Google is rolling out Android 5.1 from today, the company has confirmed in a blog post.

We revealed last month that Android 5.1 Lollipop would be shipping first on Android One devices in Indonesia, but today’s news signals the arrival of the mobile operating system on all other compatible handsets around the world. 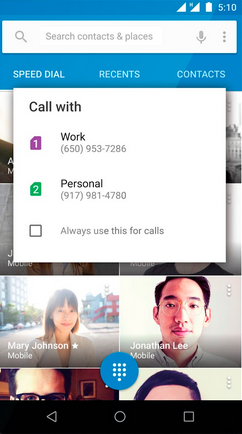 Above: Choose Your SIM

The update doesn’t bring a major upgrade to Android, however in addition to the usual stability tweaks that typically come with each iteration of the operating system, there are a few notable additions — these include support for HD calls for compatible devices (e.g. Nexus 6) and networks (Verizon, T-Mobile).

Futhermore, Android 5.1 also offers official support for multi-SIM devices — though there is already a number of dual-SIM Android phones on the market, they typically require extra SIM management software to work properly. Now, support comes native to Android, meaning you can elect which SIM you’ll use for any given task from the get go.

Perhaps the most interesting new feature, however, is “Device Protection” which basically means that if you lose your phone, it stays locked until you sign in with your Google credentials — even if someone rolls your handset back to factory settings if they find/steal your phone. Google says this will be made available to “most phones and tablets” that ship with Android 5.1, as well as its own Nexus 6 and Nexus 9 devices.

In terms of when this update will be landing on your phone or tablet, Google does say it’s rolling out today, but that usually means to its own Nexus range of devices — the actual date of arrival for you will depend on the manufacturer.