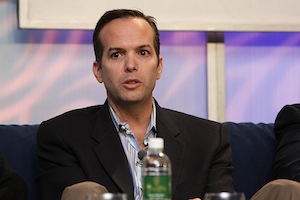 Google and Apple are increasingly seen as enemies, particularly when it comes to the mobile industry, but that doesn’t mean Google executives can’t appreciate their rival’s shiny new gadgets. Google Enterprise President Dave Girouard spent a good portion of his lunch today with journalists in San Francisco talking about the iPad, and why its success is good for Google.

Specifically, Girouard said he’s going into more meetings with chief information officers who are eager to show him their iPads. When that happens, Girouard said he usually has an easier time convincing those CIOs to start using Google Apps, the company’s bundle of office tools like Gmail and Google Docs. That’s because “their mind has been shifted.” Where a traditional CIO might be uneasy about using consumer tools in the workplace, Girouard described the iPad as “the ultimate statement of the consumerization of IT.”

In some ways, the iPad might not seem like a great fit with Google, since the device is all about downloadable native apps, whereas Google’s tools are all Web-based. (In part because Google hasn’t had an easy time getting its native apps approved.) Even so, Girouard said the iPad is part of a class of devices that are “growing up in the world of the cloud.” Those devices, which also include those built with Google’s Chrome OS operating system, will be cheaper than your average Windows PC or Mac, will be more easily replaced, and will store most of their data and applications online.

A device like that won’t get the job done for everyone, Girouard acknowledged — those iPad-owning CIOs probably have PCs on their desks. But it will probably suffice for most people. The iPad may not have a great setup for serious typing, but people are still using it for short bursts of activity.

“That describes a lot of people’s work days,” he said.

In addition to the iPad, we also talked about some of the challenges that Google faces in pushing more adoption of apps. Girouard said the team’s biggest mistake was grouping email conversations into threads. Many people love that feature (in fact, Microsoft recently added conversation threads into its email program Outlook), but it also drove others crazy, and was in fact the most common complaint among users. So Google will be adding an option to “unthread” your inbox.

More broadly, Girouard said the different Apps suffered from being built separately and poorly integrated with each other. Google is working to improve that, but it’s “not a small thing.”

“The products aren’t perfect yet,” he said.