Five weeks ago, Google unveiled Daydream View, a VR headset for its mobile virtual reality platform. The headset goes on sale today, and we had the opportunity to play with it for a few days so that we could share our thoughts.

At $79, the Daydream View sits above Google Cardboard, the company’s first foray into VR, and under all the high-end options like Facebook’s Oculus Rift and HTC’s Vive. Like the Samsung Gear VR, it is powered by a smartphone (must be Daydream-ready, the Pixel and Pixel XL are your only options right now), so set your expectations accordingly. It also comes with its own cute little controller.

The Daydream View outclasses all other VR headsets that require a smartphone. Overall, it feels surprisingly comfortable. The outside is coated in a soft fabric that’s reminiscent of a soft jersey shirt or perhaps tights you might wear while exercising. On the inside is a cushy padding. Altogether, it’s a welcome change from the metal and plastic that we’re used to on consumer electronics. This translates into longer sessions and less of a feeling like you’re “wearing” a device.

Setup is straightforward. The elastic strap is easy to adjust, though you’ll probably need to make changes once you’re in virtual reality, because making it tighter or looser also changes the focus. It takes a little bit of tuning, but once you get it just right, it gets easier every time you put it on. There’s no need for more changes, unless of course you’re sharing the device with someone else.

Unlike the Samsung Gear VR, the Daydream View doesn’t require you to carefully plug your phone into a port in order to launch VR mode. You simply place the phone sideways into the headset, laying it down on sturdy plastic and leaning the display up against the rubber nubs. Then you close the lid over the back of the phone and secure the phone in place using the elastic loop at the top of the lid. The phone detects the headset, and you don’t need to worry about lining the two up perfectly. 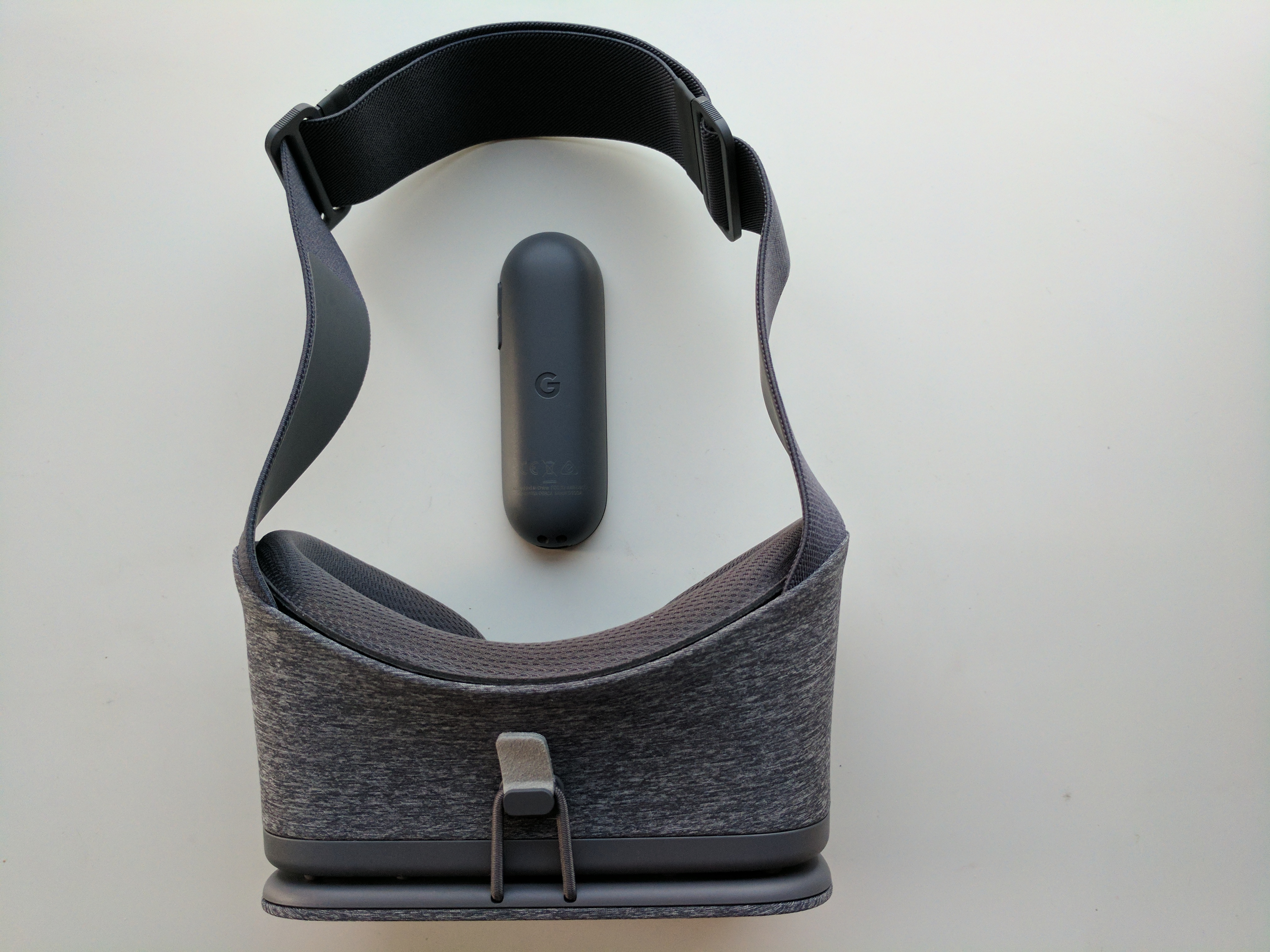 Above: Google Daydream View from above.

It’s a great touch that the controller fits into the headset itself — you’re less likely to lose it — and it’s definitely smart that Google can issue updates to it over Bluetooth. The controller is well crafted out of a sturdy plastic. It’s more stubby than the one that ships with the consumer version of the Oculus Rift, and it’s also more sensitive to touch because you can swipe in multiple ways on the touchpad. It’s hard to say if the controller’s hardware buttons will give out after extended use.

While Google calls the device a controller, it’s really more of a remote control. This is an important distinction: It’s small and designed for one-handed use. This is fine for selecting things, and it’s even sensitive enough to know when you’re rotating your wrist. But if you’re playing a game, oftentimes it simply doesn’t feel right. Take, for instance, a racing game called VR Karts. Sprint tries to give the effect of a real video game controller: You hold the controller horizontally and accelerate with your left thumb on the trackpad and shoot weapons with your right thumb on the middle “app button” — and you steer by moving the controller. It’s awkward.

Google hasn’t said anything about supporting video game controllers, like Samsung did with the Xbox One controller, and that’s quite unfortunate. Of course, that could change, but we’re not holding our breath.

The headset itself is roomy enough to accommodate eyeglasses, which is nice, because it can make the display look even clearer. In comparison with the latest version of the Oculus Rift, the Daydream View is noticeably lighter — 7.76oz vs. the Rift’s 16.57oz. The result is something that you can wear for a longer period of time without getting too uncomfortable. And you may be less likely to work up a sweat just because of what’s stuck to your face.

The Google Pixel’s display is very good for an Android phone, but here, when you’re looking through biconvex lenses right up next to the display, you start to pick up on pixels. This is one area where the Oculus Rift, for one, does show its strength over the Daydream View.

The sound from the Pixel’s speaker during Daydream is clear and loud enough, as long as you’re in a room that’s not too noisy. Even if you choose not to wear headphones, the experience generally still feels immersive.

Every now and then the display is slow to respond to user input, and high-resolution video can take a second or two to start playing, which points to the computing power that the Daydream taps. This is still mobile VR. It’s usually quite good, but it could be better. 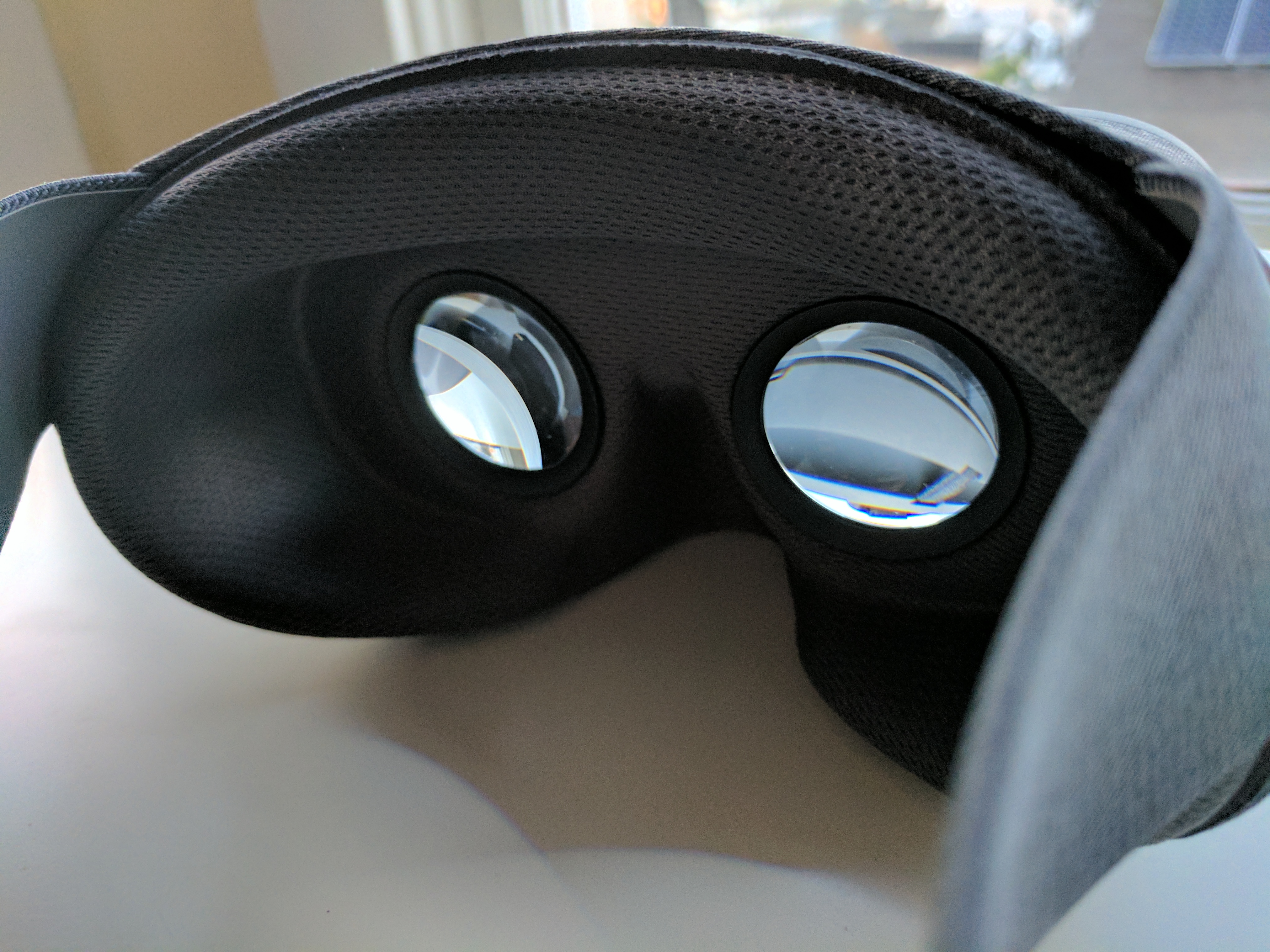 Above: Inside the Google Daydream.

The Pixel does heat up quite a bit after a while playing games or watching videos in Daydream. At one point, we received a notification saying the phone was overheating. This isn’t the best sign, given that Google isn’t marking just any phone as Daydream-ready. Presumably, if lesser phones were permitted to run Daydream, the performance could be sluggish or the battery could get eaten up faster than it does here.

Daydreaming does drain the battery of the underlying phone. On the Pixel, you still get hours of playtime, but if you look once in a while you’ll certainly notice the percentage going down more quickly than during internet browsing and more typical app usage. That said, you can use Daydream while the Pixel is charging, though that obviously limits its portability. The controller provides up to 12 hours of run time, Google says, but we never had to charge it during our testing.

But the Daydream View’s library and a specially designed version of the Google Play Store have the immediate effect of putting the Daydream View a cut above the Cardboard, build quality aside. The Cardboard effectively gave users an app that directs you to certain content in the Play Store. Here, you have a way to switch into and out of apps without removing the headset from your head, just like in the Oculus Rift and the Gear VR. And with the Play Store, you get to see previews of content while you’re still using the headset. Heck, there’s even a settings screen with a clock on it, which is more convenient than you might think. (Unless, of course, you have a Google Home nearby to tell you what time it is.)

There is also the matter of paying for apps and games. Google makes it easy in Daydream. You just type in a pin using a little numerical keyboard that pops up at the bottom of the screen after you’ve chosen to buy something. No need to rip off the headset.

But when it comes to the things you can use in Daydream today, there isn’t a whole lot to talk about. Building on its experience with Cardboard, Google has assembled some very comfortable experiences, including Google Arts & Culture, Google Photos, Google Play Movies & TV, Google Street View, and of course YouTube. But there aren’t very many third-party apps nor games yet — and the ones that do exist didn’t keep us coming back for more.

Fortunately, YouTube VR is good enough that it can be an anchor experience for the Daydream View. You can move the virtual screen around, and you can swipe to make it larger or smaller. Pinning it can make it comfortable to watch while lying down. If you want to search, you can either peck out what you’re looking for on a virtual onscreen keyboard, or you can use speech recognition. We prefer the latter, probably because it’s fast and often accurate. The 360 experiences in the app are impressive, even if the display takes away from the immersion. (And on that note, you don’t have much choice for video resolution — you can select either “Auto” or “Highest” — neither will blow your socks off)

When you play certain videos, you may see an ad. Sometimes you have the ability to skip it and sometimes you don’t, just like on desktop. But there is a difference here that will be interesting to marketers — YouTube ads in VR are extremely immersive, because you literally have nowhere else to look.

We also enjoyed a third-party game called Mekorama VR. It embraces the peculiarity of the controller to navigate. Instead of just viewing the current puzzle — in which you are expected to navigate your little robot character — from a single angle, you can drag and drop the puzzle to rotate it and move it up and down. It felt natural after playing just a short time. While the controller isn’t perfect, it is distinctive and therefore worthy of experimentation on the part of developers. It’s nice to see that happening — especially because the Cardboard never gave users this much control.

At the end of the day, though, you get what you pay for.

Google Cardboard always felt like a joke that became a very inexpensive way to experience VR for the first time. It wasn’t, and still isn’t, a product that we could recommend — if you got your hands on one by chance, there was no reason not to try it. But it didn’t make sense to actually go out and buy it.

The Daydream View is a great buy, but it’s not a must-buy. If you’re serious about VR, go get a real system. If you’re a developer, it makes sense to own this along with a slew of other VR viewers. If you’re a casual user, make sure you have a Daydream-ready phone first, but do wait until there’s enough good content to justify a purchase.