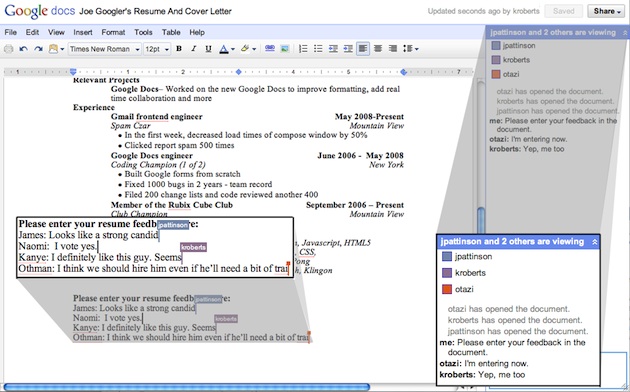 While Google’s online word processing application Google Docs has its defenders (as a frequent Docs user, I count myself among them), there’s no question it falls far short of Microsoft Word in many ways. But Google executives have said 2010 will be the year that most companies and consumers will finally start to see Docs as a serious alternative, and a Docs revamp announced today could be a big part of making that happen.

Jonathan Rochelle, group product manager for Docs, told me that Google has actually been working on reengineering the product for the past year. The company decided to scrap the old code base because it wasn’t going to meet Google’s needs for “scalability and speed,” he said.

First-time visitors to the improved service (which is being unveiled through an opt-in process starting today) will notice that it looks and feels a lot more like a desktop word processor, specifically Word. There are a lot of small touches contributing to the feeling, like the presence of a ruler spanning the top of the document and tabs that are actually formatted as tabs, rather than a series of space marks.

Rochelle said one goal of the rebuild was to erase the distinction between a browser-based application like Docs and a desktop application like Word. To that end, Docs is also supposed to do a much better job of importing and exporting documents to other applications without losing their formatting. (I played around with the new app but didn’t get a chance to test its compatibility with Word.)

Of course, Docs’ real strength is as a collaboration tool, and Google has improved those features with the addition of an instant messaging box so you can chat with the people in the document (which was already present in Google’s spreadsheet editor, but not its document editor), a presence indicator so you know where other people are editing, and the ability to annotate the text with comments like you can in Word. The spreadsheets editor has been sped up, Rochelle said, and Google is launching a standalone drawing tool.

The announcement also marks Google’s abandonment of its Gears technology, a browser plug-in that allows users of applications like Gmail and Docs to access those apps while not connected to the Internet. Google has said that it’s shifting focus from Gears to HTML5, the new version of the format used for most websites, and the new version of Docs doesn’t support Gears at all. Google will eventually restore offline access through HTML5 or a related technology, Rochelle said.

“We’re kind of stuck in the middle here, because HTML5 is not there yet … but we’re not big fans of plug-ins,” he said.

While the new features probably won’t make converts out of all Docs’ naysayers, the combination of a revamped product with the recent launch of a marketplace for non-Google tools that integrate with Google Apps lends some weight to the company’s claim that it can hold its own against much-larger Microsoft.