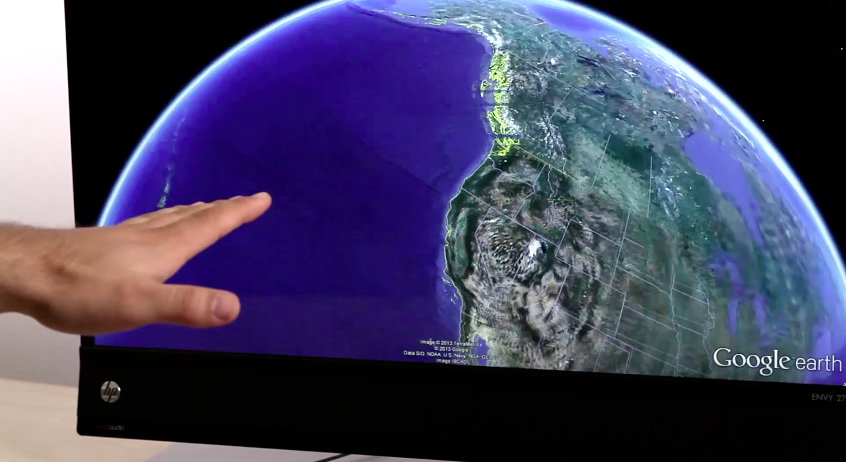 This morning Google announced that the next major version of Google Earth, available today, will support input from Leap Motion’s innovative new gesture control technology. In other words, you’ll be able to fly virtually around the planet, simply using your hand to guide and direct the software.

One billion people have downloaded the desktop version of Google Earth, which is available for PC, Mac, and Linux. That’s a staggering number of people exploring the planet in a way almost unimaginable decades ago, and that probably makes it one of the most popular pieces of software of all time. Initially, of course, only 10,000 people — developers in Leap Motion’s developer program — will be able to experience the new control technology.

But with huge pre-orders for the innovation product and already-announced bundling deals with Asus as well as full build-the-technology-right-in integration deals with companies like HP, many more will be able to enjoy flying around the planet.

This is a major win for Leap Motion, which has been innovating and consummating deals almost at light speed in the past few months. Not only is Google Earth extremely popular, this is a deal with one of the most powerful companies on the planet, Google. And it’s a first test of gesture control for a Google product that could lead to much, much more.

“We’re looking to embed our tech into watches and smartphones and glasses, and everything,” he said.

With one Google deal in the works, plus a complete hardware integration with HP in the books in which the controller widget disappears into the actual body of the laptop or desktop, Leap’s plans are getting closer and closer to reality.

CEO Buckwald added, “Our mission at Leap Motion is to provide a fundamentally better computing experience that frees people to create and explore the digital world in new ways.

Both free and professional versions of Google Earth will benefit from the Leap Motion integration, Leap Motion told me today.

The pro version of Google Earth adds analysis, measurement, visualization, and data features to the free version for use by construction companies, geologists, and marketers. Google also announced today that two new features have been added in Google Earth Pro: map-making (creating legends, scales, and titles for a map), and Viewshed (the ability to visualize viewpoints, distances, and potential views).