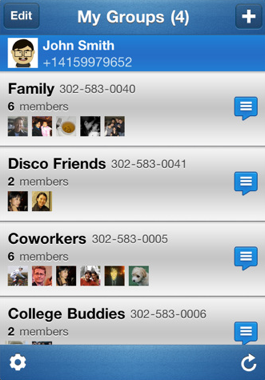 Google has just quietly launched a group messaging offering, Disco, both as an online service and as an iPhone app. The new service will face competition from apps like GroupMe, Fast Society, Kik, and Beluga.

Disco lets you organize group messaging with your contacts in a unified interface. Almost exactly like competing services, Disco requires that you sign up with a cell phone number; after that, you can set up groups of friends and contacts to communicate with.

Disco’s interface is currently much more barebones than competing apps, supporting fewer features, but that may not necessarily be a bad thing: It adds to the speediness of the app. The web interface is also stark compared to those of some similar applications in their earlier releases.

Perhaps noteworthy is the fact that the app isn’t a traditional project by Google, but more of a stepchild through its acquisition of Slide, which it seems was autonomously given the reigns in the app’s construction and release. As a result of Slide’s autonomy, the app is currently only available on the iPhone (and not Google’s own mobile OS, Android), and supports full integration with Facebook to import your friends’ details (again — not with any of Google’s own services).

A mere peek at the list of group messaging applications already on the market points to the fact that there is a wave building in this space (earlier in the month, Facebook acquired contender Beluga for an undisclosed price). The looming question is whether that wave is pointed to shore, or simply headed to dissolution. Can Google’s Disco help carry it all the way?