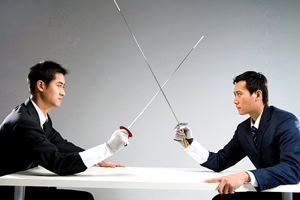 Is Google struggling to keep top employees from migrating to Facebook and other tech companies? Chief executive Eric Schmidt talked about the issue today, focusing specifically on a recent 10 percent raise for all of its 23,000 employees.

“It is a war for talent,” Schmidt acknowledged.

That’s particularly true in tech, he said, where salaries remain competitive and even the highest-paid employees can struggle to afford Bay Area property prices. But that wasn’t the only reason for the raise. Schmidt argued that if Google was just trying to stop its best workers from leaving, the raises would have been much more targeted. Making across-the-board raises and allowing the entire workforce to share in Google’s success is “good for the whole company,” he said.

There is a growing perception that Google is becoming a less exciting place to work. Schmidt countered that as any company matures, it gets stuck with the image of being “fat, dumb, and happy,” but that perception doesn’t match the reality. For example, he said “regretted attrition” at Google (presumably cases in which Google lost an employee it was trying to keep) has not increased in the past seven years.

John Battelle, who interviewed Schmidt on-stage at the Web 2.0 Summit in San Francisco, also asked about Google’s acquisition strategy. Schmidt said that Google has ramped up the rate of its acquisitions this year, so Battelle wondered about deals that turn out to be flops, where the new employees eventually get frustrated at leave. (Foursquare CEO Dennis Crowley, whose last startup Dodgeball was acquired by Google, is a prominent example.)

Schmidt said this is another case in which the press may have exaggerated the problem. Google management has taken a close look at its acquisition history and found that almost all deals had “a pretty significant impact” on Google by bringing in valuable brands, products, or talent.