Google+, the oft-denigrated social network that many want to compare unfavorably to Facebook, is now rolling out Google+ Events — and it’s a very interesting service that should put some heat on events leaders such as Meetup and, yes, Facebook.

Google’s claim is that typical event-management tools online are simplistic and partial: They basically boil down to invitations and RSVPs. I’m a dues-paying member of Meetup, and there’s some truth to that assertion:

During and after the event, Google complains, there’s little else that typical event services offer. Again, there’s something to what Google is saying — here’s a sample Facebook event that happened a few weeks ago:

Google wants to change that by making an event management tool that is useful before, during, and after an event. And it’s trying to bridge the online and offline experiences of everyday events:

“It’s how we connect with others, honor friends and family, or simply unwind after a long week. Unfortunately, the subtlety and substance of real-world events is lost online.

“Today’s online event tools are really just web forms that ask, “Are you going?” Worse yet, they bail [on] when you need them the most: during the actual event, and after everyone leaves.”

Google+ Events is designed to fill that gap. It starts, of course, with creating an event: 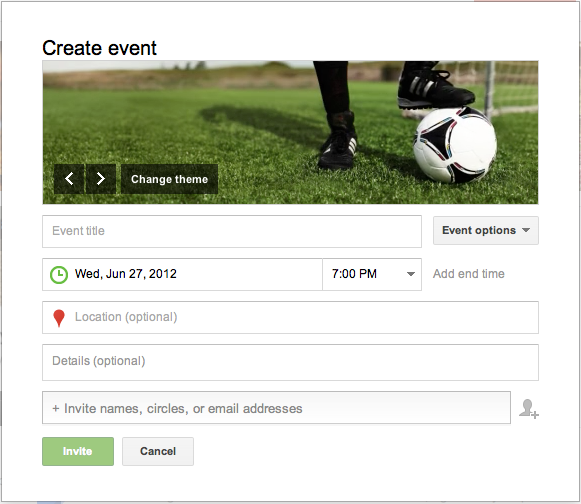 Note that you can change the theme: A quick look reveals themes for sports, fashion, party, birthday, wedding, dinner, and kids events. The Location functionality seems to fully integrate into Google+ Local, which means that you can simply start typing, and local landmarks start appearing.

Adding invitees is simple if they are on Google+ … simply start typing their names, and the people will appear. Regular Event users would be better served to create a Google+ Circle for their attendees, so that all the members of a group can be added with a single click.

After creating your first event, a new tab appears in Google+ with your event visible on it. You won’t be able to tell from this screenshot, but the image is dynamic: There’s HTML5 magic in the image that, in this case, is causing the bubbly to actually be … bubbly: 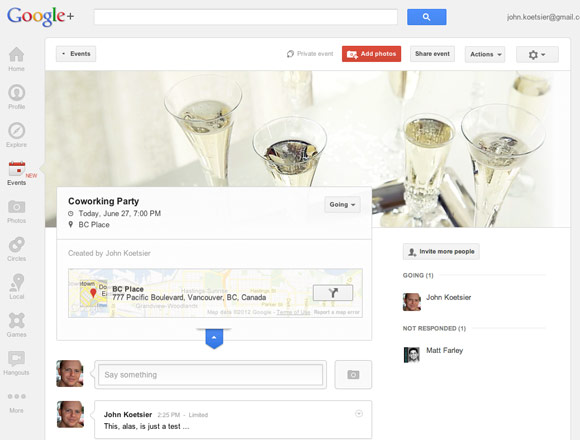 Users can then add photos, share the event, or start a hangout right on the event page. And when they accept, the event is automatically added to their Google Calendar.

But it’s when the event starts that the real magic begins.

Google calls it Party Mode, and it’s only available on Android phones with the Google+ app. Party mode will share any photos or videos taken while you’re at the party automatically to the event, streaming updates to others who are at the event or following it online. Additionally, if you schedule a hangout, anyone who can’t make it to your event but still wants to be included will get an automatic invite to the hangout, so they can at least watch the event and participate that way.

The question in my mind: How does this compete with Meetup, Facebook, Evite, or any of the other players in event scheduling and management? When I spoke to a Google representative, she said that competing with other services was not the company’s priority:

“It’s more about giving our users one beautiful Google experience,” she said. “Events are such a huge part of life … it’s a natural step within Google+.”

That said, there’s no doubt that this is direct competition to other events sites.

Meetup is the gorilla in the room, with almost 11 million monthly visitors and 340,000 events scheduled and attended each and very month in 45,000 cities. That’s a lot of traction, and, one would assume, a significant proportion of those who are looking for an event-management service.

And Facebook is no small competitor. Despite the fact that its event solution is limited, Facebook has the tremendous advantage of built-in supply: the 900+ million Facebook user base.

But Google+ has what at first look seems to be a better, more comprehensive solution than either of them. Google has done its homework on this one and created a full-circle event experience.

VentureBeat has reached out to both Facebook and Meetup for comment, and this story will be updated as necessary.