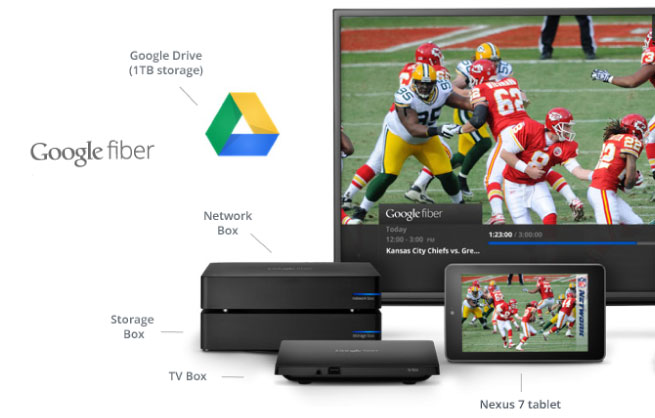 Much like The Batman’s effect on Gotham City’s criminals, Google’s newly announced Fiber TV service will strike fear into the hearts of big cable company executives across the country.

Why? Because Fiber TV promises to fix everything that’s wrong with the current crop of cable TV services.

The Fiber TV service, which is paired alongside Google’s new ultra-fast broadband Internet service, means Google will now compete with the likes of Verizon FiOS, Comcast’s Xfinity TV, AT&T Uverse, Time Warner Cable, and others. And while Google’s service is only available in Kansas City for the time being, there are still plenty of reasons why the aforementioned cable providers should be scared. The biggest of those is that Fiber TV has the potential to show people what they’re missing.

Current cable TV providers have restrictive bundling, and you have to pay for every extra. Most offer hundreds of channels and a standard cable box (with remote). You might have access to a limited library of on-demand content, but that’s pretty much the extent of perks for a basic TV service. If you want the maximum number of channels (HBO, Showtime, etc.), you’ll have to pay more. If you want HD quality video, you’ll have to pay for an upgraded cable box. And depending on the extent of your TV show recording behavior, there’s also a higher monthly rental charge for a cable box with DVR functionality. Not only that, but you basically need to have an upgraded cable box to take advantage of any second-screen functionality on mobile devices (using your iPhone as a remote, scheduling your DVR to record shows, and more). All of this can cost upwards of $100 to $200 per month, which doesn’t include the cost of bundling a high-speed Internet service.

Likewise, Google Fiber TV has some similarities with the existing cable services. Customers can get access to 161 channels (fewer if you don’t want to pay extra for premium channels like HBO and Showtime). And like most other cable service, Fiber TV offers access to a library of on-demand content. But beyond the television programming, everything else on Fiber TV is better.

Fiber TV’s basic subscription package gives customers an HD TV receiver box, as well as a DVR box with 500 hours (2TB) of storage that can record up to eight channels at the same time. Instead of a crappy remote that embarrassingly looks like something you ripped off from a PlaySkool toy chest, Google Fiber TV gives you a $199 Nexus 7 Android tablet for free. (You can control the service using the dedicated Fiber app on the Nexus 7’s touch screen or use voice commands.)

All of this, including 1Gb Internet service and 1TB of Google Drive storage, costs Google Fiber customers $120 per month plus a one-time $300 construction fee. If you’re willing to sign a two-year contract, Google will waive the construction fee.

We don’t know if Google Fiber will be a tremendous success as a business. The service hasn’t launched, it will only be available in Kansas City to start, and it will take at least a year before the broadband infrastructure is built out enough to gauge its progress. Google also doesn’t have any experience running a broadband TV/Internet business.

Still, Google certainly has plenty of interest in the service. If it can manage to make fiber profitable, it may stand a chance at revolutionizing the cable industry.