After more than six months of no updates, Google has finally updated its Android distribution data. Android Pie, the latest version of Google’s mobile operating system, has passed the 10% adoption mark.

The Android developer website hosts a distribution dashboard that details the adoption of Google’s mobile operating system versions. With over 2.5 billion active Android devices out there, this is useful information that Google used to update on a monthly cadence. For anyone who makes decisions regarding Android, it’s incredibly valuable to know how widely (or narrowly) an Android version — or more importantly, an API level — has been adopted.

The distribution numbers were last updated in October 2018. In early December, Google added a small note below the chart: “(update coming soon: data feed under maintenance).” Months passed and the company would not explain what was going on, until today, when it finally updated the numbers. In short, Google is blaming a technical glitch, says it has resolved the issue, and is promising to keep the dashboard updated again. But those updates won’t come on a monthly cadence anymore — about quarterly is more likely, Google told VentureBeat. 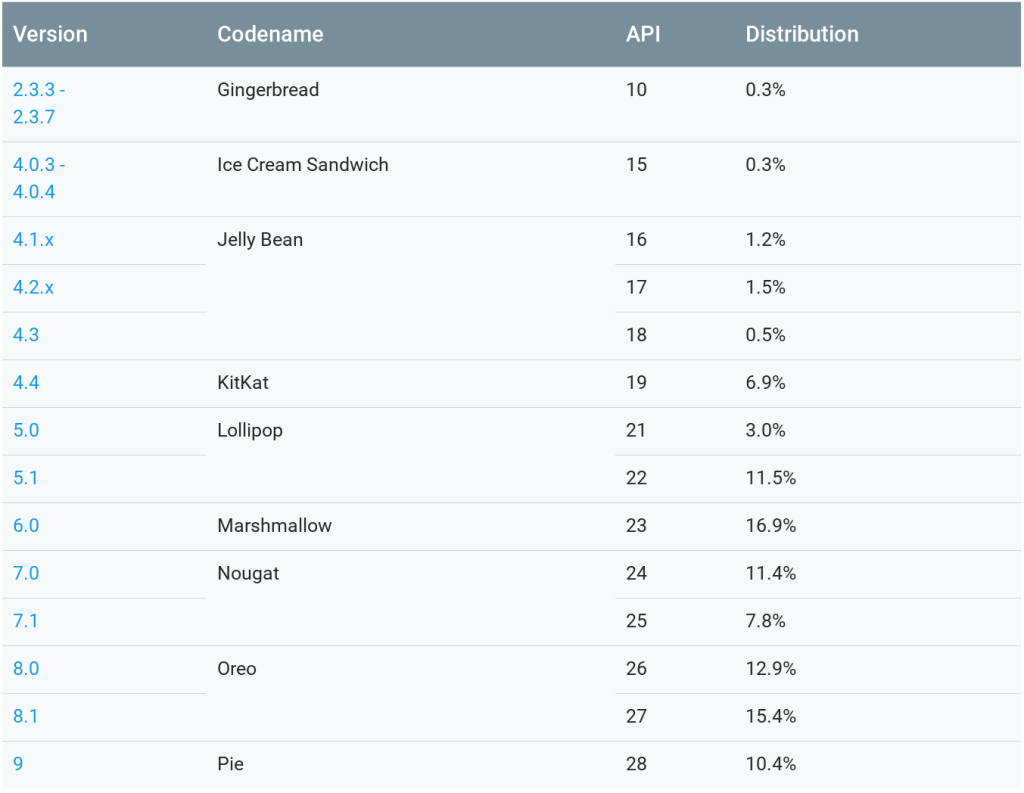 The Android adoption order now stands as follows: Oreo in first place, Nougat in second place, Marshmallow in third, Lollipop in fourth, Pie in fifth, KitKat in sixth, Jelly Bean in seventh, ICS in eighth, and Gingerbread in last. It will be a few more months before Pie can break into the top three. 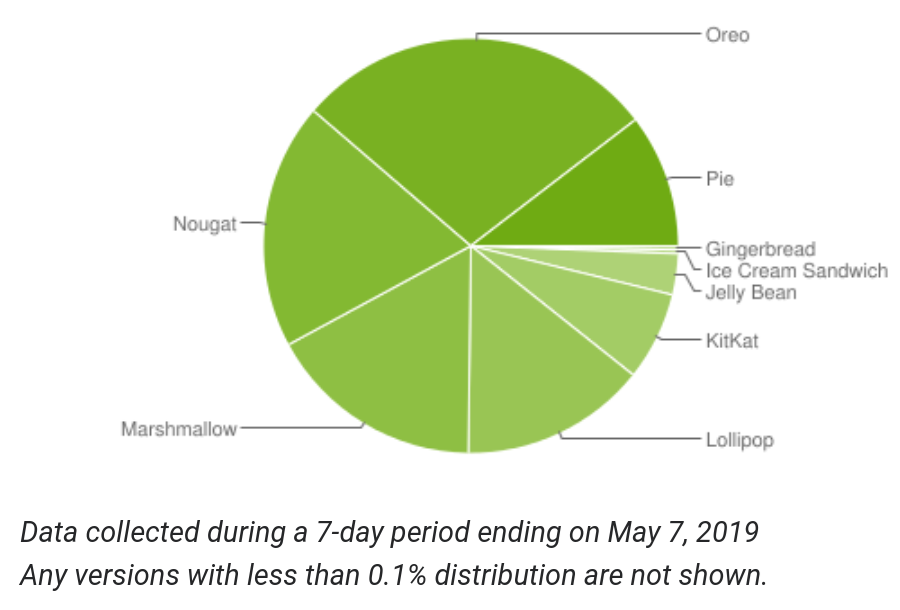 Google releases major Android versions on an annual basis. With every new release, Android users hope their phones will get updated sooner than before, but the wait is excruciatingly long. Google has tried to both change the importance of the annual updates and speed up their arrival. With Android ICS, the company released Google Play Services, which it uses to push various features and improvements to Android devices without requiring a full operating system update. With Android Nougat, the company started releasing monthly security updates. With Android Oreo, Google introduced Project Treble, which modularized the mobile operating system so that it is easier to update.

Since Android Pie is the major release that succeeds Android Oreo, it’s the real test for Google’s biggest attempt to speed up updates. Every device that shipped with Project Treble enabled had the potential to get Android Pie quickly. Phone manufacturers and carriers of course still had to play ball, but from a technical perspective, this was the easiest Android update yet.

Google says Android Pie hitting 10% faster than its predecessors indicates that Project Treble is working. That might be true, but not necessarily. It’s also possible that proportionally more users bought new Android Pie devices than Android Nougat and Android Oreo devices in past years. Or, more older device owners (not Android Oreo with Project Treble) upgraded to Android Pie than did to Android Nougat and Android Oreo in past years. We simply don’t know what got more Android users on the last version sooner until Google tells us.

In addition to finally fixing the distribution dashboard, and saying updates will be at a less frequent interval, Google did say it wants to provide more context. The company has not figured out what form that context will take.