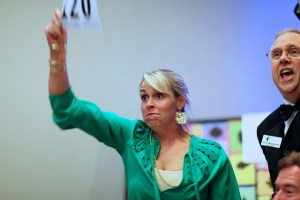 The prominent search box atop the popular Firefox browser played the coveted prize jewel in a Christie’s-like bidding war between the web’s wealthiest whales.

Google competed in an aggressive auction with Microsoft and Yahoo to maintain its place as the default search engine on Firefox, according to AllThingsD. It successfully renewed a three-year deal, but the placement came with a massive markup and will now cost the company $300 million a year.

That’s one heck of a price jump. In 2010, Google contributed 84 percent of Mozilla’s $123 million total revenue. In 2012, Google will give Mozilla three times that amount.

So is it worth it? Most likely.

Microsoft, hungry to buy Bing more exposure, salivated over the search spot like a ravenous wolf, and was said to have competed ferociously to oust Google from the Firefox throne. The company, which produces the most-popular browser, Internet Explorer, is a distant second in the search market. It would have likely benefited greatly, to Google’s detriment, from additional default queries originating via Firefox.

Meanwhile, the pricey deal comes as Chrome and Firefox duke it out for second place in the browser competition. Perhaps the almost $1 billion in funds will help Mozilla, a non-profit organization that heavily relies on the search deal for revenues, ease the pain as it continues to lose browser market share to Google’s Chrome.