Google is announcing Friend Connect (link goes live tonight), a way to “sprinkle social features across any web site in a matter of hours,” Google director of engineering David Glazer says. And also a way to put Google at the center of every social interaction on the web.

See this sample site created by Google, below: 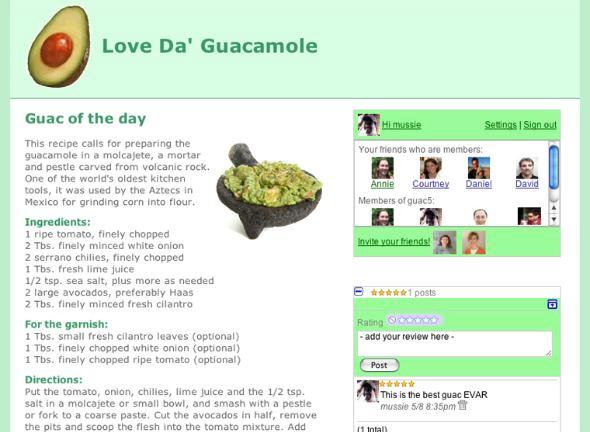 But Friend Connect is very much a work in progress. It will let you access your Facebook friends lists, to see things like which of your Facebook friends has also visited a particular site. But, it doesn’t offer a way for Facebook applications to run on your site. On the other hand, it very pointedly will let you run applications that use a standard called Open Social. However, MySpace, the largest social network that is part of Open Social — as well as Facebook — launched their respective rival “connect” services last week. More on that in a second.

One. A way for users to sign in to access their social network data on a third-party site. Friend Connect a so-called “single sign-on” system called OpenID, which offers one set of credentials that you can use anywhere on the web, instead of having to create new password and login. You can use AOL, Yahoo — or Google — usernames and passwords through Open ID to get access.

Two. A source of friends, where you’re able to access your friend relationship data from a social network, on a third-party site. The standard being used is called OAuth, and it lets you choose to bring in friends from sources. When Friend Connect launched tonight, it will integrate with Google Talk, Orkut and Facebook. Soon, hi5 and Plaxo. Eventually, standard APIs will give better access. MySpace isn’t ready, but probably will integrate at some point.

Note for social network users and application developers: Sites that use Friend Connect can opt-in to introduce information back in to news feeds on other sites — so maybe you’ll see information from a friend on another site integrated into Facebook? It’s like Beacon, Facebook’s ad program, but better, maybe.

Why is this a big deal?

MySpace and Facebook have both introduced their own “connect services.” MySpace launched a service it calls “data availability” last Thursday, that also lets you access your MySpace data like friend relationships on third-party sites. Facebook released something similar on Friday, which was actually more of an update to its existing application programming interface for accessing its data on third-party sites (that API was first launched in the fall of 2006). In fact, Facebook’s API is apparently how Google is getting Facebook information for Friend Connect.

What does this all mean? Will thousands if not millions of smaller site begin integrating with social networks through any one of these services? Will third party applications on Facebook and other social networks find whole new audiences across the web? Who will offer the preferred method of connecting social applications: MySpace, Facebook or Google? Will it be MySpace because of its size, Facebook because its booming growth and impressive tech, Google because of its many interlocking services and market leadership in other areas?

We see the web moving toward an end-state where people can use any app with any friend on any site,” Glazer says.

For a little more, here’s an excerpt from Google’s response to my question about Google’s use of Facebook’s data. Note: I obtained this recording via ReadWriteTalk (Thanks, Sean), and I encourage you to read ReadWriteWeb’s excellent coverage of Friend Connect, here.