Google is entering the carpooling business this week with the launch of a new app called RideWith.

Available for Android only at first, the service will actually be rolling out via Waze, the GPS-powered, crowdsourced, traffic-thwarting company acquired by Google more than two years ago. According to a report in Reuters, the new app will launch as a pilot only in Tel Aviv, Israel, but as with most beta projects, there will be scope for opening it to new markets depending on the outcome of the tests.

With the advent of smartphones, carpooling has become an increasingly popular means of saving money and improving efficiency through sharing car journeys, letting travelers save money while ensuring there are fewer vehicles on the road. The main driver is essentially paid by other people to drive them to and from places, though the fee is typically small — it’s supposed to cover costs such as fuel. This is a big differentiator from the likes of Uber, which caters more to drivers seeking to make a profit.

RideWith calculates a cost based on the anticipated fuel consumption and “depreciation” based on mileage, and the driver is free to accept or decline the ride. 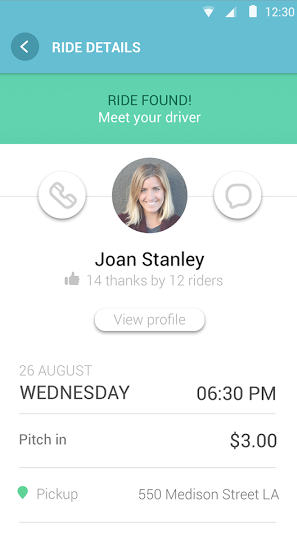 RideWith will use Waze’s navigation system to identify which routes cars take most often, and try to pair drivers with people looking to travel to the same destinations. Drivers will also be limited to two journeys each day, which serves as a deterrent for those seeking to build a business out of it. Also, the service is only available during rush hour.

Launching in Israel first makes sense for the pilot project given that Waze first came to fruition in Israel, initially as “Freemap Israel,” back in 2006. From Google’s perspective, this move may not be entirely surprising, either — it has long been rumored to be launching a ride-hailing service, though that was expected to involve autonomous cars.

Google’s so-called self-driving car may be fully functional, but its road tests seem to suggest that for as long as people continue to share road space with their robotic counterparts, accidents will always happen. So for now, Google is still betting on the human touch. And by steering clear of a more traditional taxi-like service, it should go some way toward helping the Internet giant avoid the legal wrangles faced by Uber.

By restricting the scope of the service to carpooling, this aligns RideWith more with BlaBlaCar, the heavily funded French startup that’s currently steamrolling its way to European dominance.