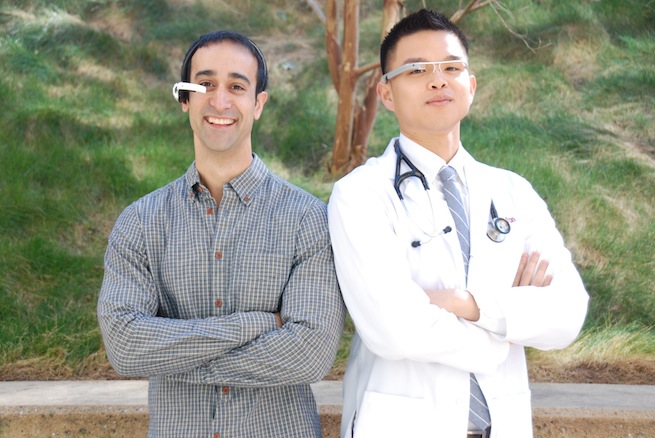 Most of us wouldn’t be excited about the prospect of a camera mounted on the side of our face.

But then again, most of us aren’t doctors.

Google Glass uses augmented reality and voice activation to project data into our field of vision. And while the technology is still in its early (and annoying) stages, it holds a lot of promise in the medical field.

One obvious use includes looking up drug data. Doctors could easily perform a search for a drug or disease using Glass’s voice-recognition commands: “OK, Glass, Google ‘What’s the correct dose of Temazepam?'” Likewise, the gadget could also document a patient visit, such as storing a photo of a skin rash or an audio recording of a conversation.

Indeed, Google Glass may be the butt of jokes for consumers, but it represents some exciting possibilities for health care. As Arun Matthews, the chief medical information officer at Texas Tech University and a full-fledged Glass enthusiast, puts it: “I dream about technology being seamless and invisible, but constantly present, anticipating my needs with point-of-care decision support — but getting out of the way so that physicians can be physicians.”

What ideas are entrepreneurs already cooking up? 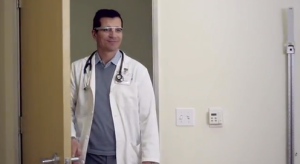 Above: A screenshot from Augmedix’s promo video.

It’s still early days for the technology — Google only recently began shipping the gadget to a carefully selected group of people, and it won’t sell the device until the end of the year. But already developers are buzzing with ideas, and many of them are related to health care.

Ian Shakil [top, left] is one of the first entrepreneurs developing a Google Glass app for doctors. Shakil hit on the idea for his startup, Augmedix, while working at wearable electronics company MC10 and trying Glass for the first time.

“I had an epiphany moment and committed to drop everything,” he said.

To buy him some time to test the merits of the idea, Shakil applied for funding from Upstart, a startup that asks wealthy backers to fund individuals rather than projects. With the $55,000 he raised, Shakil incorporated the company and began to experiment with Google Glass at hospitals.

The first app is still in development — so Shakil wouldn’t reveal much at this stage — but he did tell me both patients and doctors were open to wearing Glass in a clinical setting. “We see all kinds of applications for health care providers,” he explained.

Shakil has a point — physicians are already avidly discussing potential applications on LinkedIn forums. Some of their most plausible medical scenarios include:

Is Google Glass the future of connected health?

The “quantified self” movement — the idea that tracking your own health can help you live longer and better — is gathering steam. A small but growing segment of the population is hooked on fitness apps and trackers like FitBit One, Jawbone Up, and Nike+ FuelBand.

For them, Google Glass is the logical next step. Beyond tracking your daily movement with apps like FitBit, you could potentially track your social interactions and analyze how that affects your mood. Healthy eaters — or those looking to improve their diets — could get a real-time feed of nutritional information when they shop, which would help them make better food choices.

An unintended benefit of the widespread adoption of health and fitness tracking devices is that patients routinely use devices in the doctor’s office. They frequently show their primary care provider how much they exercise daily and how well they eat by referring to a FitBit, for instance. Likewise, doctors will often use a medical app on a tablet or smartphone device as a research tool.

“I used to be worried that patients would be concerned that I didn’t know everything — but now I look something up whenever I see patients in the exam room,” said Dr. Roni Zeiger, a practicing physician and Google’s former health chief.

Zeiger sees immediate value in Glass to improve the quality of care. “It would be great to more fluidly pull up relevant information,” he said.

For example, he recently saw a patient at an urgent care center with a skin problem and realized that “no workflow currently exists to take and store an image for a doctor to see.” Zeiger had to describe the rash in writing and draw a doodle so he could track the patient’s progress — a practice that could be replaced by Glass.

When will we see Glass at the doctor’s office?

Before committing to fund the next wave of Google Glass apps, investors need to see evidence of traction.

Only time will tell whether hospitals and health practitioners will invest $1,500 into purchasing Glass when most doctors already have a smartphone or tablet device. As the price of Glass falls over time (and the technology improves to justify the added cost), developers writing Glass apps may find success more easily.

Meanwhile, developers will need to tackle compliance and regulatory issues as well as deal with potential patient privacy concerns.

“Industry giants will not be willing to gamble on such a venture until there is either a huge public outcry or the government mandates this level of innovation as the front-end standard for electronic health records,” said Matthews. “I’d say we’re looking at at least five years.”

Obstacles aside, Silicon Valley’s venture firms will be looking for investment opportunities in the near future. Andreessen Horowitz, Google Ventures, and Kleiner Perkins recently formed a partnership known as the “Glass Collective” to help fund the development of apps.

“I used to work at a neurobiology lab, and scientists are excited about being able to interact with their experiments without having to remove layers of gloves,” said Google Ventures’ Bill Maris in a recent interview with VentureBeat.

And Maris is just one of the investors who is intrigued by health-specific applications.

“We are excited about the possibilities,” said Missy Krasner, an entrepreneur in residence at Morgenthaler Ventures and a former cofounder of Google Health.

However, Krasner pointed out another obstacle: Physicians may be reluctant to record sessions due to increased risk of medical liability.

On a fundamental level, there’s another risk: Google Glass developers would be basing their fledgling businesses on the intellectual property of another company. If Google decides to discontinue Glass (not wholly out of the realm of possibility — just ask anyone whose company relied on Google Reader), then anything those developers invested in Glass-based apps would be a bust.

“My feeling is that it’s futuristic and forward thinking — but a little early,” Krasner explained.

Would you feel comfortable if your physician examined you while wearing Google Glass? Or would you record your own doctor’s visit using Glass? Please let us know in the comments section below.