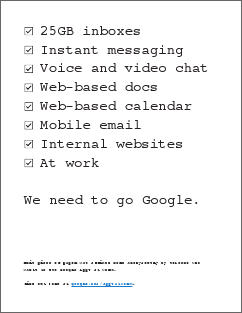 Google, the search engine company that recently announced its plans to expand by building a PC operating system to compete with Microsoft Windows, has launched yet another offensive aimed at ousting Microsoft’s other near-monopoly, Microsoft Office. The campaign includes marketing collateral meant to be used by office workers to convince their companies to “Go Google.”

Google Apps, which the company is pushing as a replacement for Microsoft Office and Lotus Notes, is a suite of browser-based tools that replicate and, in some ways, improve upon the most popular office productivity sofware: email, calendar, spreadsheets, text messaging, slide presentations. Google’s apps have nowhere near the feature sets of Microsoft’s versions, but Google is hoping to convince businesses they won’t miss Microsoft’s advantages.

Users access and control Google Apps through their browsers. The apps run in the cloud of Google’s server farms and other computers distributed all over the globe, and can be reached just as easily at home or on the road. “It’s all hosted by Google,” chirps the marketing home page for Google Apps.

But that’s the exact reason many IT staffers are reluctant to support Google Apps within companies. The thought of storing all of a company’s email, spreadsheets and presentations on Google’s website raises the security and privacy antennae on system administrators’ heads. Can Google ensure company documents won’t be stolen or lost? Just look at what happened to Twitter, whose corporate documents were pilfered from outside the company. And what happens when the Internet connection to Google’s servers is slow or down? Google needs to overcome these and other reactions among IT workers to the  idea of browser-based tools.

To do that, the Go Google campaign, which includes billboard ads in New York, Boston, Chicago and San Francisco, is meant to overwhelm IT departments with demand for Google from the office workers they support. Google marketers have whipped up brazen posters designed to be printed out and tacked up anonymously around the office where everyone will see them: “Please, please, please. Can we go Google?” 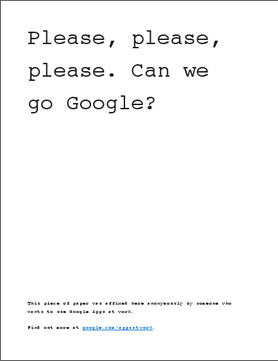 The viral marketing stuff is interesting not because it’s novel, which it isn’t, but because it’s well-executed. The posters look as if an anonymous regular-Joe employee in the company whipped them up from sheer passion for Google Apps. Even if you know the posters are boilerplate, they’re entertaining. That softens up the reader to be more willing to consider the message.

The email template, should you click on it, doesn’t pussyfoot around. It opens a new message in your default mail client with the subject line “Let’s check out Google Apps” and a pre-written email that can be edited, rather than starting from scratch:

I’ve been using Google Apps (which includes Gmail, Calendar, Docs, and more) at home for a while, and I thought that we should explore using Google Apps Premier Edition, the enterprise-ready version of Google Apps, here at work. There’s no special hardware or software required, and Google even provides a 99.9% uptime guarantee at a very affordable cost of $50/user per year. I think our company could really benefit from using Google’s services to help us be more efficient and productive.

For more information, you can check out www.google.com/appsatwork.

All you need do is type in your sysadmin’s address and click Send. Even better, you can customize the message.

It’s only when you examine Google’s in-house marketing collateral more closely that you spot the company’s key message, the one aimed at IT buyers rather than end users. Google Apps are priced for the recession, at $50 per user per year. Microsoft Office suites for workplaces start at $450 for Microsoft Office Small Business, or just under $300 for an upgrade disc instead of a full installation. 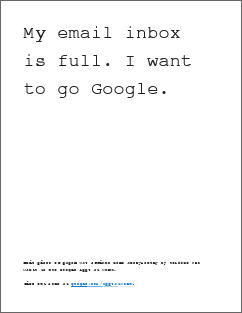 Google is hoping that, just as senior employees’ lust for their iPhones led them to demand support for Apple’s smartphone at work, the Go Google campaign collateral will spur workers to demand that their Microsoft tools be replaced by Google Apps. And that when the people who make that decision look into it, they’ll decide the cost savings make it worth the risks of switching to remote-hosted applications.

Other companies attempting to market themselves via word of mouth could learn from Google’s posters and email. Instead of being written in marketing buzzword-speak, they use the informal argot of American office space. “My email inbox is full. I want to go Google.” In a way, I pity the hapless IT managers who’ll have to respond to these charges.