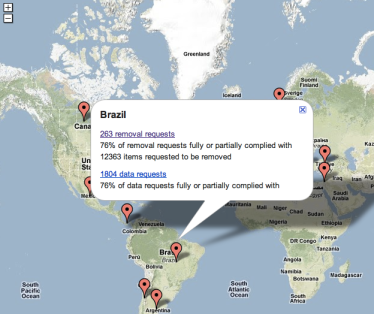 Governments take notice: You can investigate Google’s business practices, but Google is also studying you.

The search company has updated its Transparency Report, which discloses inquiries that governments make about Google users as well as their requests to remove content. The update adds data from July 2010 to December 2010, along with new ways to digest that data.

The announcement comes on the heels of news the United State’s Federal Trade Commission (FTC) is investigating Google’s business practices. “We hope that our Web site improvements help you to see more clearly how the Web is shaped by government influence and how Google responds to requests for information and removals,” writes Matt Braithwaite of Google’s Transparency Engineering in a company blog post.

According to Google, “this tool visualizes disruptions in the free flow of information, whether it’s a government blocking information or a cable being cut.”

Below is what Syria’s traffic looked like during May and June. Note the massive dip on June 3rd, after Syria shut down its internet, rendering more than two-thirds of all Syrian networks unreachable.

Google also provides a map pinpointing removal requests by country. It currently shows Brazil having the most requests in 2010, with 263 government requests for content removal (versus the U.S.’ 54 requests.). According to Google, Brazil’s high figure was due to the popularity of Google’s social networking site, Orkut. Brazil’s Transparency Report reveals that during the Fall election period in Brazil, the number of court orders issued from electoral courts rose, ordering removal of content related to political campaigns. (One court ordered removal of more than 11,500 photos from Picasa, Google’s photo site, alleging the photos contained images of pages from copyrighted books.)

Also notable is that Hong Kong had fewer than 10 removal requests, all of which Google complied with. This low number is surprising considering Google’s rocky relationship with China. In January 2010 Google had a face off with China over censorship and in March 2011 Google accused the Chinese government of interfering with Gmail accounts.